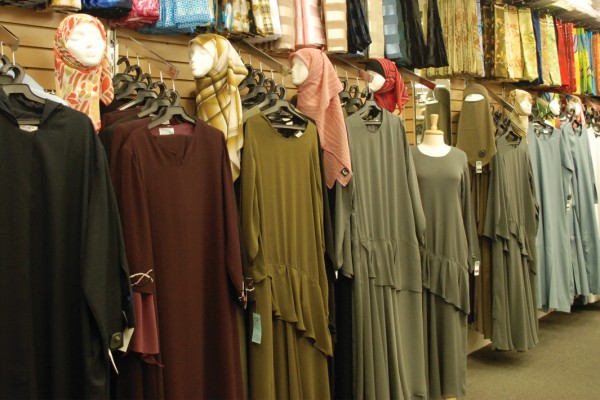 If you go to Philadelphia today you will see small boutiques and seamstresses that cater to young, trendy Muslim women dotting the city’s diverse neighborhoods. You can also find fashion shows featuring the abaya (loose fitting robe) and niqab (face veil), preferred by a small number of Muslim American women. The Philadelphia Muslim fashion scene is on the rise, and is showing that a series of crimes in Philadelphia and the surrounding area by perpetrators wearing the abaya, the niqab and the burqa (a loose robe that covers the body, face and eyes) cannot ostracize local Muslims from the larger community or create stigmas associated with dress.A string of robberies over the last two years by burqa-clad bank robbers and the more recent abduction of a 5-year-old girl from her Philadelphia classroom by a woman dressed in an abaya and niqab initially resulted in undue discrimination of Muslim women in a city where Islam and Muslims have become integral to its multicultural makeup.

Sahirah Taylor, a local Philadelphia Muslim who wears a niqab, recounted to the Philadelphia City Paper that she felt ostracized after a mother reprimanded her children for venturing too close to her saying, “You know those Muslim women are kidnapping children.”

But Muslim women in Philadelphia have enjoyed a thriving culture around modest fashion for many years and use it to stake claim to the meanings associated with their dress. Almost every weekend there are events in the city featuring vendors peddling the latest fashions from trendy home spun abaya and tunics to newly imported, brightly colored headscarves. South Philadelphia’s United Muslim Masjid’s annual fashion show is going into its 15th season this year and is a testament to the longevity of the Philadelphia Muslim fashion scene.

The Show Me How 2 Cover fashion convention held on March 2, 2013, is another example of this bustling culture. Hundreds of Muslim women poured into the building to view the latest fashion offerings from stores and seamstresses, both local and remote. Local “hijabinistas” that attended the event may surprise those who did not know that high-fashion and Islam could go hand in hand.

Some women were seen in an array of different abayas or burqas paired with niqab, Louis Vuitton bags, hijab (headscarves) from Target, clothing from H & M, and colorful stiletto heels.

In a hadith, the Prophet Mohammad was asked, “What if someone likes that his clothing and his shoes are beautiful?” The Prophet responded, “God loves to see the effects of His grace upon His servant”(Tirmidhi 2819).

While the Muslim fashion community has thrived for years in Philadelphia, the recent attention of mainstream media has placed it front and center.

In its March 13, 2013, issue, Philadelphia City Paper did what no other mainstream Philadelphia newspaper had done before. It ran a positive story on faith and fashion in Philadelphia on its front page, accompanied by pictures of the local hijabinistas dressed in Western-style clothes, headscarves and face veils. It is nice to see Muslim women who choose to wear a headscarf, and even the small percentage who choose to wear a face veil, all accepted as part of Philadelphia’s culture.

In addition, blogs like Philly Hijabis Killing It, Philadelphia-based seamstresses like M’Squared Fashunz – who has constantly produced well-attended fashion shows that draw audiences from beyond the Muslim community – and stylists like Saniyyah Bilal of CurioStyling, Inc. continue to gain popularity throughout the city.

At a recent fashion showcase, Saniyyah Bilal put the headscarf in the spotlight in her segment titled “Hijabi Couture.” It was a nice juxtaposition to see fully clad, fashionably dressed women strutting down the runway only minutes after models in clothes that left little to the imagination. Under Curiostyling’s Instagram page, one non-Muslim fashion enthusiast congratulated her for a “fabulous job” and another called her segment “innovative.”

Despite the recent crimes, the presence of Muslims in Philadelphia, in particular hijabinistas with their firm grip on fashion, help combat the potential for negative stereotypes to take hold in the city. Muslim women are an integral part of Philadelphia and the coverage by non-Muslim news outlets and positive responses by non-Muslim citizens of Philadelphia highlight this phenomenon.

Keziah Ridgeway is a history teacher, fashion blogger, writer, and mentor from the Uptown section of Philadelphia. HE DAILY STAR publishes this commentary in collaboration with the Common Ground News Service (www.commongroundnews.org).