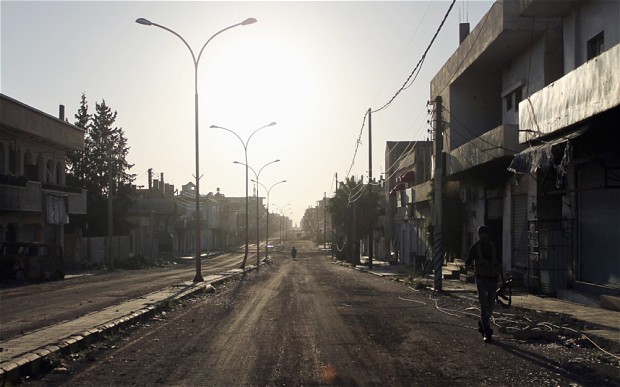 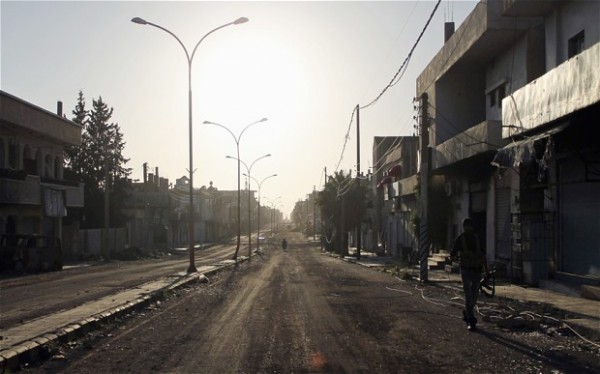 Saudi Arabia is backing a push by Syrian opposition rebels to carve out a “liberated” area in southern Syria, opening a key route of attack on Damascus.

The Kingdom is working with American intelligence officials in Jordan to help build a strong rebel force in southern Syria that can fight to seize control of Damascus, and offer a ‘west friendly’ counterweight to the proliferating hardline Islamist rebel groups, high level Syrian opposition sources and eyewitnesses have told the Daily Telegraph.

“Saudi Arabia is supporting groups here that are not religious extremists.

Americans are supervising the flow of arms and the Saudis pay for them,” said a rebel who called himself Ahmed Masri speaking to the Daily Telegraph from the southern city of Deraa.

Saudi Arabia is also said to be supporting a US-led programme to train Syrian rebel fighters in Jordan. A well-placed opposition lobbyist based in Jordan told the Daily Telegraph that “the Americans are doing the training, but Saudi is paying the money for it”.

Those receiving training are mainly moderate Sunni Muslim tribesmen from central and southern Syria, many of whom have served in the Syrian army.

Many are chosen by local opposition military councils established in southern Syria.

“They are asking us to take part in a 15-day training programme,” said one Syrian fighter in Jordan speaking on the condition of anonymity.

Syrian state media this week criticised Jordan for hosting the training of insurgents, threatening that by actively supporting the opposition Amman risks falling into the “volcanic crater” of the conflict.

An editorial in the government daily Al-Thawra and Syrian state television said that Jordan has a hand in training terrorists and then facilitating their entry into Syria,” while state radio accused Jordan of “playing with fire.” Western and Arab officials have said the fighters would help to protect the common border with Jordan and help to create a ‘save haven’ for refugees inside the country. Israel and the United States are also concerned that not supporting moderate rebel factions in the area will give a free reign to well-funded Islamic militant groups to seize the territories close to the Israeli frontier with Syria in the Golan Heights.

“The best case scenario is to empower a more secular opposition now and have them push on the regime from the south. This protects Israel from Islamist militants, giving them a more reasonable neighbour and opens a route to push the regime from Damascus,” said a senior opposition figure in Jordan.

Abdullah al Masri, an opposition activist speaking from Deraa said: “Deraa is the key to Damascus, there is no way to liberate Damascus without liberating Deraa. It is the last artery for the regime; the last and largest governorate near the capital and to the Jordanian border that is still in their control.” Much of the Saudi government funding is now being channelled through the western-backed Supreme Military Council (SMC), the armed wing for the opposition National Coalition.

Following a resurgence in the international appetite for finding a solution to the Syria crisis, General Salim Idriss, who heads the SMC has been touring donor countries, including Saudi Arabia, Qatar and the United Kingdom to rally support and map a military strategy.

Qatar has been working more closely with Turkey, who are more sympathetic to the Doha backed Muslim Brotherhood, whilst Saudi Arabia has been pushing much of its support through Jordan, analysts and diplomats have said.

The training and the influx of foreign-funded weapons have coincided with significant rebel gains in the south of Syria. Earlier this week rebels seized control of parts of the Karak neighbourhood in Deraa.

Most significant was the rebel captures of the headquarters of ‘Brigade 38’ and with it a major weapons cache. A report leaked to the Daily Telegraph claims the arms store included dozens of containers of Air Force Cobra missiles.

The fighting has also spread along the Damascus-Deraa highway and comes to within two kilometres of the Syrian capital. Seizing this area will connect three major opposition strongholds of East Ghouta, Daraya and Kadam.

“We are using the road to Jordan as a route to take out our wounded fighters,” said Captain Islam Aloush, a spokesperson for Liwa al-Islam, one of the largest rebel fighting groups in Damascus.