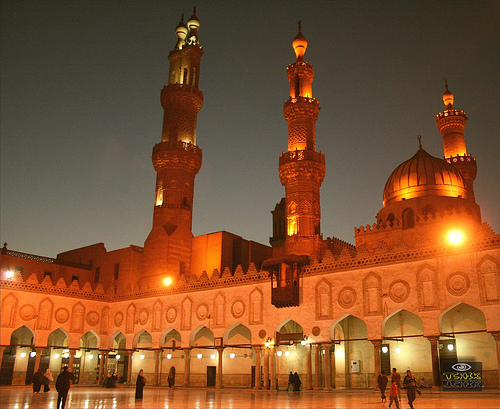 Our early ancestors adopted a straight thinking methodology with which they managed to build a great civilization from which humanity had benefited greatly. They fiercely fought against crooked thinking and left for us a straight methodology of thinking through which we are able to deal with the evolving challenges that rise with the passage of time while keeping the basic principles of religion intact as they are not subjected to change due to passage of time or change in geographical locations.

Unfortunately a group of people took the period of our great ancestors as a whole structure without grasping its intricate meanings and fine tunings so they went astray. This erroneous way of thinking which adopted rigidly the outer structure of our ancestor’s methodology of handling issues became the grand obstacle which holds the Muslims back from achieving real progress in economic development and renovating the Islamic discourse.

This rigid and extreme perspective became a fertile soil for rigid thinking and a spring for extreme ideologies which advocate for disintegration of societies and seclusions of people away from their communities. These calls also encourage individuals to live in their imaginary world which results from their sick minds and their inability to interact with themselves or their surroundings. This rigid thinking has some characteristics which define their rigid attitudes and erroneous behaviors and they are as follows:

The one who adopts an extreme methodology of thinking tends to always look at the past and carry the fine details of different matters and place them in our present time while turning it from fine detailed matters to big differentiating issues. He places these issues as a border line between him and others and the fact is that most of these issues are pertinent to customs and traditions and subject to change such as costumes and dress codes, method of eating and drinking, wearing perfumes among other minor issues. I believe that the danger does not come from turning these fine details of the past into big issues in our present which are worthy of debate but the real danger rather comes from taking this rigid way of thinking as a measure with which people are evaluated so whoever follows this extreme methodology is welcome on board while any rising opponents are subject to hostility and defamation. The problem is that this created illusion leads to living an isolated life which in turn leads to a point where he believes that it is necessary for him to commit suicide and explode himself where people are around. He does not see a point out of his life because he swims against the current and he believes that he needs to procreate more and fill the earth with his children’s screams to cover up for the gap of lacking quality of thinking so he turns to quantity instead.

Another characteristic of this inclusive and isolated way of thinking is extremism. The one who adopts this way of thinking believes that life is a sin from which one should seek purification and purification comes through many forms such as refraining from all signs of life like arts, literature, social activities and sharing people’s lives in good times and bad ones. It also goes to an extent of refraining from learning etiquettes and fine manners. We find that these people brag about not indulging life and not caring much about it yet they can’t fully apply this extreme way of thinking about life. For this reason we find him contradicting himself as he picks and chooses between doing and refraining from certain types of things which all fall in the same category. This means that the only guide for his choice is his own personal desire and whims. This mentality goes by far against the scientific mentality which applies logic by which societies are built and that is why he finds difficulty in absorbing and grasping the way the scientific mentality functions; a fact which makes it difficult for him to adopt straight thinking.

Those who adopt such extreme way of thinking has a mentality which believes in conspiracy theory and thus he sees all people around him plotting against him in an attempt of destroying him; a belief which makes him always cautious, alert, defensive and stubborn in his dealings with people around him.

The one who has this mentality is usually conceited, proud and think highly of himself while looking down on others. He simply turns speculative matters to decisive definite issues. Also the issues which are subject to consideration and variation in opinions turn to necessary matters which are not eligible for debates. This mentality fails to set priorities straight and messes with the balance with which issues are measured and that is why trivial matters take precedence in their scale of priorities over grand matters which are of immense importance. They prefer personal interest over communal and general one; an attitude which has a negative effect over the society as a whole.

One of the major characteristics of this extreme mentality is that they stand firmly against all forms of reform and renovation in Islamic societies under the guise of prohibited innovations. They always tend to stick to forms not meanings and they always stand with the husks and never penetrate through the kernel. They also use their own desires in understanding textual scriptures. Moreover they hold a tight grip over Muslims through widening the circle of prohibition which makes people fail to enjoy life. They release themselves from abiding by the true scholarship of authentic scholars and moderate methodology of Islam and choose to enter into a strange phase of reading the legal texts with no prior education or legal training so they walk blindly and come up with weird legal rulings and extreme juristic stances. They tend to underestimate the prestigious positions of scholars and place highly half and self claimed ones. They also master the art of accusing Muslims of committing disbelief and polytheism and call for raging wars against their fellow Muslims because they simply differ with them and refuse to adopt their extreme mentality and rigid way of thinking.

I believe that it is about time for the resistance of this extreme thinking methodology to take a national level and our path for gaining the momentum of reform and resistance is to resort to the Azhari methodology which under its auspices authentic knowledge and true teachings of Islam were spread across the globe. The Azhari methodology teaches the Ash’araite school of theology which is the school of most Muslims across the world. It also teaches the four Sunni legal schools of jurisprudence (Hanafi, Maliki, Shafi’I and Hanbali) without denying the necessity and vitality of individual and group based independent legal reasoning (ijtiahd) and with the permissibility of taking juristic opinions from the rest of the eight legal schools of jurisprudence such as al Ibadiyyah, al Zahiriyyah, al Imamiyya, al Zaydiyyah. This capacious mentality gives room for integrating juristic opinions that are taken from the Islamic rich juristic heritage which reached more than eighty different schools of jurisprudence across its history along with taking juristic rulings from both the Quran and the Prophetic sunnah to cope with the needs of our time and the challenges that we face today.

In our contemporary world we also need to turn our eyes towards the major objectives of Shari’ah in terms of preserving mind, self, religion, dignity and possessions which are the fundamental tenets that represent the general system and are the bases for human rights. It also works as a blue print for the Islamic civilization. In terms of ethics, the Azhar teaches the different schools of Sufism through which one can purifies his heart from conceit, pride etc..and adorn his heart with righteousness, authentic legal authority, beneficial knowledge along with obedience to God and his Prophet (peace be upon him)

Some people believe that such extreme current may be beneficial and that religious multiplicity is a good matter and that is an erroneous stance. The favored multiplicity is the one that was adopted by al Azhar for centuries. It is a multiplicity which does not make people repulsive of religion and does not hold a sword against the belief of others. God says in the Quran, “…As for the foam, it vanishes, [being] cast off; but as for that which benefits the people, it remains on the earth. Thus does Allah present examples. (13:17)