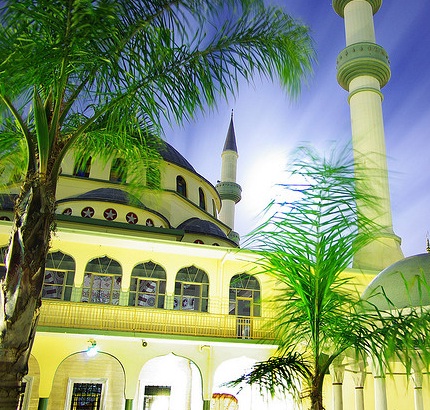 Auburn-Gallipoli Mosque would like to express its heartfelt sympathies to the Ozen family who lost a family member and the NSW Police Force who lost a dear colleague, and subsequently held the funeral prayers at the Mosque.

It is the practice in Auburn-Gallipoli Mosque to conduct the funeral prayers in the presence of the closed casket in the forecourt of the Mosque. The funeral prayers are very similar to other Muslim prayers and require prayers to pray in unison in the guidance of the Imam with direct reference to the deceased.

On the 8th of March 2013, regular Friday prayers that are always held at the Mosque at around 1.00pm coincided with the prominent funeral of a member of the NSW Police Force, Mr Erdinc Ozen. Mr Ozen’s funeral attracted various members of the wider community and the forecourt of the Mosque was unprecedentedly congested.

The words “not welcome” was never uttered and cannot be used as a result of this place being the house of God.

However, Dr Asaroglu realises, in hindsight, that this has offended the family. Upon becoming aware of this misunderstanding, Dr Asaroglu visited the family three days later expressing his apologies. He again would like to express publicly his sincere and deep apologies to the wider community along with the Ozen family.

“Since its inception in the 1990s, Auburn-Gallipoli Mosque has fostered brotherhood of all religions and inclusiveness towards the Australian Community at large. Annual Open Days that have been held for at least a decade have attracted thousands of community members who have pleasantly observed the welcoming nature of the Auburn-Gallipoli Mosque. The Mosque is an important place for community members to come and farewell their lost ones and we always take care to ensure that the families’ needs are considered and catered for”.

“In this incidence, I take responsibility for not ensuring that the funeral rites went smoothly. Auburn-Gallipoli Mosque is reviewing its funeral procedures and will investigate the matter to clarify exactly what should have been done in order to avoid a repeat of this incident”, Dr Asaroglu said.

Dr Abdurrahman Asaroglu holds a PhD from Melbourne University and is a Chaplain of Sydney University. He also held positions as a Tutor at University of Western Sydney and currently Chaplain and the Values Co-ordinator for a Private School and is responsible for the Interfaith Dialogue Programs. In his capacity as a Values Co-ordinator, Dr Asaroglu has visited numerous churches and synagogues and believes in inclusiveness in the Community. Dr Asaroglu regrets that the misunderstanding on the 8th of March 2013 has led to him being held responsible for the sort of actions that he has campaigned against all his life.