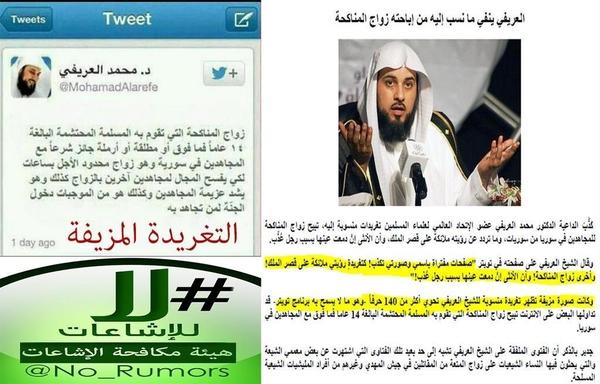 Earlier this year, the media was all abuzz with news about a scandalous “gang rape” fatwa that had been issued by a prominent Saudi cleric on Twitter. The story was proven to be invented and spread by Islamophobes. Many of the western media outlets that promoted the story have since amended, retracted, or deleted their stories. Although the story was thoroughly discredited, it is still being passed off as fact, especially amongst conservative news outlets. In spite of being discredited for two months, a report two days ago in Human Events uncritically cites it as an established fact while mentioning a suspiciously similar fatwa.

Inclusion of such erroneous information as fact, the lack of links to the source material on YouTube, and that The Human Events Group is the sole source for the so-far uncorroborated story should all raise doubts concerning the merits of the article. Unfortunately, the Washington Times with its “reputation for hard-hitting investigative reporting” has accepted it as gospel truth and, citing it as its only source, joined in the infatuation with “gang rape” fatwa.

It seems that the media is concerned only with fatawa that are sensational and scandalous – regardless of their merits as fatawa or the relative frequency of such items. Private individuals might be excused for accidentally spreading errors and falsehoods. But it is entirely inexcusable when agencies and institutions do the same and pure negligence to pass off such dubious information without any critical analysis.

It is also entirely inexcusable to intentionally spread errors and falsehoods – and reprehensible to do so maliciously. When we are faced with questionable opinions, we need to behave as good citizens and operate within the expectations of civil society: we need to verify and, if qualified, offer criticism which can lead to a correct or better answer. We also need to be respectful – not engage in personal attacks against and mockery of the source (whether it be the individual or the religion itself). Being good members of civil society is a challenge for us all. We must hold ourselves to high standards regardless of how others behave.