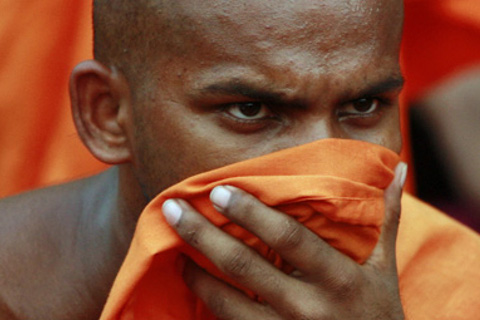 The term “hardline Buddhist” may seem like an oxymoron, but it accurately describes the movement currently leading attacks on Muslim communities in South Asia. So far, though, the United States has done little to pressure the governments in question to halt the violence, to the chagrin of human rights activists.

Sri Lanka, where 69 percent of the population is Buddhist, is home to a small community of Muslims who kept a low-profile during the country’s lengthy civil war. Recently, however, a number of hardline Buddhist groups have sprung up, stirring anti-Muslim fervor among the majority Sinhalese ethnic group. These groups — that call themselves names like the Buddhist Strength Force and Sinhala Echo — accused the minority community of producing exam results “distorted to favor Muslims” and claimed that calves had been slaughtered indoors — which is illegal in the country’s capital. Neither claim has borne out, but they have led to mass protests and attacks against Muslims and their communities.

Most recently, a Buddhist monk-led mob in Colombo, Sri Lanka’s capital, swarmed and assaulted a Muslim-owned clothing warehouse on Thursday:

The BBC’s Charles Haviland in Colombo said the monks led a crowd which quickly swelled to about 500, yelling insults against the shop’s Muslim owners and rounding on journalists seeking to cover the events.

Five or six were injured, including a cameraman who needed stitches.

Eyewitnesses said the police stood and watched although after the trouble spread they brought it under control.

Similar persecution is ongoing against Myanmar’s Muslim communities, who make up only four percent of the total population. In the face of spreading violence, also kicked up by hardline Buddhists, Burmese Muslims are fleeing their homes, leaving behind destroyed mosques and shops. At least 40 people have died in the clashes since March 20, as the fighting moves closer to the capital. These most recent attacks have left some 12,000 people displaced from their homes, according to the U.N.

Tomas Ojea Quintana, the United Nations’ special rapporteur on Myanmar human rights, on Thursday said he had “received reports of state involvement in some of the acts of violence,” earning himself a rebuke from the Burmese government. President Thein Sein on Thursday said that his government would use force if need be to clamp down on the violence, but only as a last resort.

The violence against Burmese Muslims in general has found a particular target in members of the Rohingya ethnic group. Stateless due to their status under a 1982 citizenship law, many Burmese believe the Rohingya are illegal immigrants from neighboring Bangladesh. Because of this, the Rohingya have faced down violence and persecution for years, to the degree that some have called their situation a “genocide.” The group has caught the eye of hacktivist group Anonymous, which is now claiming credit for promoting more awareness of the Rohingya’s plight.

At present, the U.S. has backed President Thein’s call for calm, but not commented on the violence in Sri Lanka, nor taken apparent action to pressure either government to halt the attacks. This echoes previous instances of violence, such as in Sept. 2012, when the State Department urged Bangladesh to keep its borders open as Rohingya fled from Myanmar. President Obama, during his Nov. 2012 visit to Myanmar, called for greater protection of minorities in the country. So far, this call hasn’t not seemed to be heard in Myanmar and Sri Lanka.