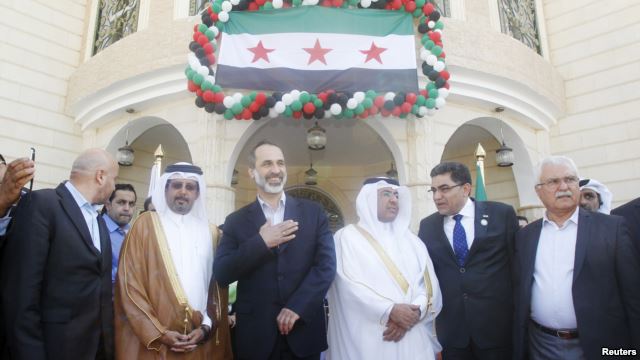 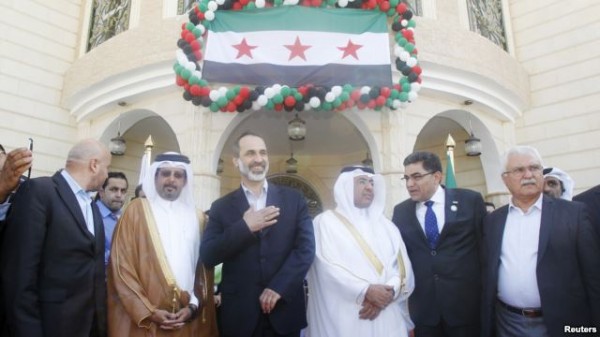 The Arab League’s decision to recognize Syria’s anti-government coalition as the legitimate representative of the Syrian people has boosted the opposition’s international standing and opened the door to increasing an already substantial arms flow to rebel fighters, analysts say.

The opposition also opened its first embassy in the Qatari capital, Doha, on Wednesday.

Opposition leader Mouaz al-Khatib and Qatar’s state minister for foreign affairs cut a ceremonial ribbon at the entrance to the embassy, with Arab and western ambassadors in attendance.

Qatar pushed for recognition of the opposition, despite objections of several Arab League members.

Joshua Landis, a Syria expert at the University of Oklahoma, called the developments in Doha “an important victory for the West.”  He said the move spells trouble for Syrian President Bashar al-Assad because it legitimizes – and will increase – the already significant flow of arms to the Syrian opposition funded by wealthy Gulf Arab states.

“It was a big blow to the Syrian government. The entire Arab world was watching this,” said Landis. “The Arab League also announced that it was now legal to give arms – and send arms – to the rebel cause. Of course, they had all been sending arms anyway.  But it lifts this legal conundrum off of the whole issue.”

Syria’s seat at the Arab League had been vacant since the group suspended the country’s membership in 2011 in reaction to Assad’s suppression of political protests, which have evolved into a brutal conflict that has left 70,000 dead and millions displaced. Most Arab League members have called for President Assad to step down.

Khatib recently resigned as head of the opposition Syrian National Coalition, but led the Syrian delegation in Qatar at al-Thani’s invitation.

While the Syrian opposition is dangerously fragmented, bigger coalitions are forming.

“There are over 1,000 militias. We’re seeing a Darwinian process taking place and certain larger coalitions are emerging out of this factionalism on the ground,” said Landis.

“[You have] an Islamist front led by Salafists, with al-Qaida-linked al-Nusra to the right of them, and then the supreme military command that the United States helped get together and that is linked to the civilian opposition that was just recognized at the Arab League,” he said.

According to Landis, the opposition coalition is becoming more powerful and is the beneficiary of a new arms flow from Croatia.

In February, the New York Times first reported that Saudi Arabia was supplying Syrian rebels with arms bought from the Balkan republic. The supply operation was prompted by the fear in the West, and among Gulf allies, that jihadist groups were better equipped than other rebel units and were increasingly able to dominate the anti-Assad movement.

The newspaper reported Monday that U.S. Central Intelligence Agency consultants were helping Arab nations and Turkey in getting heavy weapons to the Syrian rebels despite Washington’s public stance against supplying such weapons itself.

Syria, Russia and Iran criticized the Arab League’s decision to recognize the opposition. Syria’s state-run news agency said the League had compromised its values for the sake of Gulf Arab and Western interests by giving its seat to what it called the “deformed” Syrian National Coalition.

Russia’s foreign ministry called the league’s move “illegal and indefensible” because it said the Syrian government is still a “legitimate” United Nations member-state.

Iran, which has sent advisers, money and weapons to help Mr. Assad retain power, also vented its anger at the Arab League for recognizing “the so-called provisional government.”

But Robert Pastor, an analyst at American University, said the Doha recognition gives the opposition needed legitimacy. “This is a very significant and serious development. It shows the solidarity of the Arab nations behind the opposition against Assad [and] puts him in a much more isolated position than ever before,” he said.

“In effect, virtually all of the Arab nations associated with the Arab League have essentially come out for Assad’s dismissal. So this is a very serious step,” Pastor said.

Also Wednesday, Khatib said the refusal of international powers to provide Patriot missile support for rebel-held areas of northern Syria sends a message to Assad to “do what [he wants].”

NATO said Tuesday it had no intention of intervening militarily in Syria after al-Khatib said he had asked the United States to use Patriot missiles to protect rebel-held areas from Assad’s air power.

Assad sent a letter appealing to the leaders of Brazil, Russia, India, China and South Africa to “work for an immediate cessation of violence” and guarantee a “political solution” in Syria.