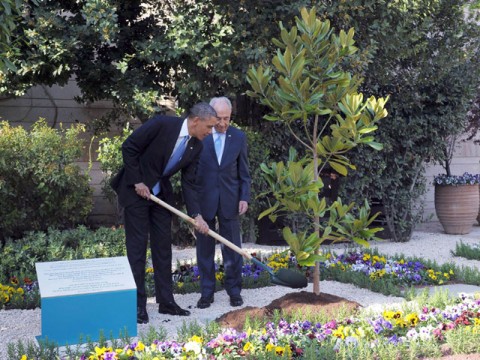 March 20, 2013 “Information Clearing House“ – Those who hoped that Barack Obama would be arriving in Israel to bang Israeli and Palestinian heads together, after four years of impasse in the peace process, will be sorely disappointed.

The US president’s trip beginning today may be historic – the first of his presidency to Israel and the Palestinian territories – but he has been doing everything possible beforehand to lower expectations.

At the weekend, National columnist James Zogby and other Arab-American leaders revealed that Mr Obama had made it clear that he will not present a peace plan, because Israel has indicated it is not interested in an agreement with the Palestinians.

Any lingering doubts about Israel’s intentions were removed by the announcement of a new cabinet, hurriedly sworn in before the president’s visit. This government makes Benjamin Netanyahu’s last one, itself widely considered the most hardline in Israel’s history, look almost moderate.

Zahava Gal-On, leader of the opposition Meretz party, concurred, observing that it would “do a lot for the settlers and not much at all for the rest of Israeli society”.

The settlers’ dedicated party, Jewish Home, has been awarded three key ministries – trade and industry, Jerusalem, and housing – as well as control of the parliamentary finance committee, that can ensure that the settlements flourish during this government’s term.

There is no chance Jewish Home will agree to a settlement freeze similar to the one Mr Obama insisted on in his first term. Rather, the party will accelerate both house-building and industrial development over the Green Line, to make the settlements even more attractive places to live.

Uzi Landau, of Avigdor Lieberman’s far-right Yisraeli Beiteinu party, has the tourism portfolio and can be relied on to direct funds to the West Bank’s many Biblical sites, to encourage Israelis to visit.

The new defence minister, who oversees the occupation and is the only official in a practical position to obstruct this settler free-for-all, is Likud’s Moshe Yaalon, a former military chief of staff known for his ardent support of the settlements.

True, Yair Lapid’s large centrist party Yesh Atid is represented too. But its influence on diplomacy will be muted, because its five ministers will handle chiefly domestic issues such as welfare, health and science.

The one exception, Shai Piron, the new education minister, is a settler rabbi who can be expected to expand the existing programme of school trips to the settlements, continuing the settlers’ successful efforts to integrate themselves into the mainstream.

Far from preparing to make concessions to the US president, Mr Netanyahu has all but declared his backing for Jewish Home’s plan to annex large parts of the West Bank.

The only minister with any professed interest in diplomatic talks, Tzipi Livni, is well aware that opportunities for progress are extremely limited: the peace process received just one perfunctory mention in the coalition agreement.

Mr Obama, apparently only too aware he is facing an Israeli government even more intransigent than the last one, has chosen to avoid addressing the Knesset. Instead he will direct his speech to a more receptive audience of Israeli students, in what US officials have termed a “charm offensive”.

In a sign of quite how loath the White House is to tackle the settlements issue again, its representatives at the United Nations refused on Monday to take part in a Human Rights Council debate that described the settlements as a form of “creeping annexation” of the West Bank and East Jerusalem.

Mr Obama’s hands-off approach will satisfy his constituency at home. A poll for ABC-TV showed this week that most Americans support Israel over the Palestinians – 55 per cent to 9 per cent. An even larger majority, 70 per cent, think the US should leave the two sides to settle their future for themselves.

Ordinary Israelis, the US president’s target audience, are none too keen on his getting involved either. Recent survey data show that 53 per cent thought Mr Obama would fail to protect Israel’s interests, and 80 per cent believed he would not bring progress with the Palestinians over the next four years. The mood is one of indifference rather than anticipation.

These are all good reasons why neither Mr Obama nor Mr Netanyahu will be much focused on the Palestinian issue over the three-day visit. As analyst Daniel Levy observed: “Obama is coming first and foremost to make a statement about the US-Israel bond, not the illegal occupation.”

That is also how it looks to most Palestinians, who have grown increasingly exasperated by US complacency. US officials who went to Bethlehem in preparation for Mr Obama’s visit on Friday found themselves caught up in anti-Obama protests.

The unspoken message of this visit, then, is that the Netanyahu government is free to pursue its hardline agenda with little danger of anything more than symbolic protest from Washington.

The new Israeli cabinet lost no time setting out its legislative priorities. The first bill announced is a “basic law” to change the state’s official definition, so that its “Jewish” aspects trump the “democratic” elements, a move Haaretz newspaper termed “insane”.

Among the main provisions is one to restrict state funding to new Jewish communities only. This points to a cynical solution Mr Netanyahu may adopt to placate the simmering social protest movement in Tel Aviv, which has been demanding above all more affordable housing.

By freeing up even more cheap land in the West Bank and East Jerusalem, he can expand the settlements, further eat away at the chances of a Palestinian state, silence protests, and wrong-foot the opposition. It could be a winning formula.