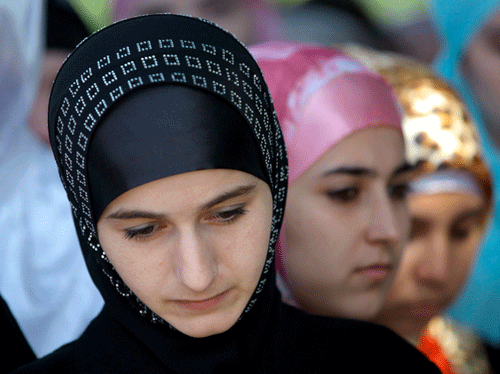 CAIRO – A recent ban on the wearing of hijab in Russia’s southern region of Stavropol is squeezing the Muslim population in the area, forcing many to send their daughters to neighboring districts to be able to wear the outfit or give them home schooling.

“If they think that because something will happen with my daughter I will forget my religion — I say, no, religion is the goal of my life,” Ali Salikhov, a Muslim father, told The New York Times on Tuesday, March 19.

“For 70 years they taught us that there was no God, but that passed, and this will also pass.

“In 20 years they will have forgotten that hijabs were ever forbidden in Russia.”

Salikhov’s daughters have been prohibited from wearing hijab after their school in the village of Kara-Tyube banned the Muslim outfit in October.

Though they were initially allowed to attend their school in September while donning hijab, they were told later that they would not be allowed in unless they took off their headscarf.

The issue grabbed media attention after their stern Russian schoolmistress became hero for refusing to admit the girls to school in hijabs.

The region’s leaders backed her up by introducing a uniform that does not allow girls to wear head coverings at all — a restriction that affects a population of around 2.7 million.

Joining the debate, Russian President Vladimir Putin supported the ban on hijab in schools, describing the outfit as an “alien tradition”.

The restrictions have left no other option to Muslim families but to send their daughters to other districts to continue their education, while observing their religion.

Hearing the news, Salikhov’s 15-year-old daughter Raifat wept that she would be sent to neighboring Dagestan.

“She didn’t want to leave,” said her mother Maryam Salikhova.

“She was sad, and the other girls were sad. They said, ‘Stay here with us.’ But she was already grown up.”

Her niece Amina, 10, also began having one-on-one sessions with a teacher instead of attending class at the regional elementary school.

The hijab ban is seen as an attempt to stir up tensions between religious groups that have been living together peacefully for decades.

“When we discussed the social aspect of the problem with hijabs, one of our opponents said, ‘Let these people go back to their historical homeland, to their hijab homeland, and let them wear hijabs there,’ ” said Murad Musayev, a celebrity lawyer from neighboring Chechnya who agreed to represent four fathers of daughters now excluded from school.

“This is a pretty common opinion in Russia.”

The ban comes amid rising ethnic tensions that have confronted the Kremlin recently.

To curb the tensions partially in the North Caucasus, Putin granted subsidies and broad autonomy to its predominantly Muslim regions.

But now the Kremlin must cope with growing resentment in mostly ethnic Russian regions like Stavropol, which lies at the edge of the Caucasus mountain range, dominated by Russian Orthodox population.

Taking the decision to ban the hijab, authorities have also angered Muslim ethnic groups, including those that have never adopted the headscarf.

Anvar Suyunov, a Nogay from Kara-Tyube, said the edict touched on “a very tricky question of self-determination” and could prove dangerously divisive.

“It’s a stupid idea, because they could tear the country apart,” he said.

“Every action has a reaction.”

Others, including the Salikhov family, saw the decision as a trial by the authorities to create problems in the village to force the Muslim family to leave the area.

“At least then I would know I was breaking the law.”