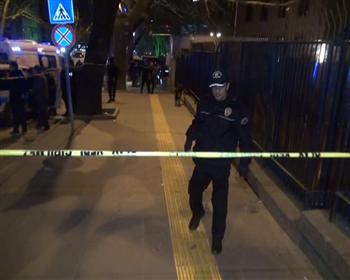 One person has been injured in a bomb explosion in front of the Turkish Justice Ministry in Ankara, while the Justice and Development Party (AKP) headquarters in the city was also attacked by a flame thrower.

Police teams and ambulances were immediately transferred to the scenes after the blasts, with the police taking strict measures in the surrounding area.

One person was injured in a double hand grenade attack somewhere close to the car park of the ministry, Justice Minister Sadullah Ergin said in a televised interview. The injured individual was the spouse of a ministry employee, he said.

Interior Minister Muammer Güler said in a televised interview that some equipment of the thrower was found close to the scene and that police were searching the area.

The minister also confirmed that the attack on the AKP building was probably realized by a flame thrower attack.

Doğan News Agency reported that the bomb hit a point between the eight and seventh floors, where the office of Prime Minister Recep Tayyip Erdoğan is located.

Erdoğan is currently in the Netherlands for an official visit, but he has been informed of the attacks by both Ergin and Güler.

Two have been detained in relation to the attack on the ministry building, daily Hürriyet reported on its website.

Separate reports said a written statement carrying the name of the outlawed Revolutionary People’s Liberation Party/Front (DHKP/C) was left at the scene in front of the ministry.

Police have been continuing operations against the group since it claimed responsibility for the Feb. 1 suicide attack targeting the U.S. Embassy in Ankara, which killed one person, as well as the attacker, Ecevit Şanlı.

The attack also comes at a time when the Turkish government is engaged in its process to find a peaceful solution to the Kurdish issue.