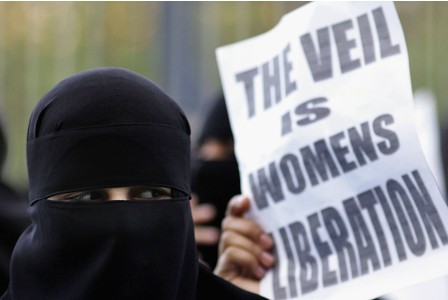 The struggle British women have when they convert to Islam formed the basis of a symposium on Middle Eastern Studies held at the American University of Sharjah yesterday.

A study, entitled ‘Narratives of Conversion to Islam in Britain – Female Perspectives’, was launched at the event. It gives an insight into the cultural pressures and lack of support some converts say they endure.

Yesterday, academics heard the poignant story of Irish Catholic convert Mary Batool Al Toma, who now lives in Leicester, England, and is a director of the New Muslims Project there.

Al Toma, whose organisation partnered with Cambridge University in the UK to compile the report, told delegates: “When women convert we experience ruptured family relationships.

After 30 years of conversion I can assure you that my family will still come out with a statement or an opinion or an observation that will leave me completely floored. We do put ourselves outside the family to the point that we are no longer consulted about family matters because we have chosen to step outside the family.

“I suppose in some sense it is a betrayal to them in terms of the way that we were brought up and whether that upbringing has somehow been lacking on their part.

“I was born and brought into a Catholic family of 10 children. I chose to accept Islam. How I was treated at that time was extremely painful to the point where my mother, just a few days before she passed away, when she was dying of cancer, put her arms around me and I could feel her squeezing the life out of me as she apologised to me for the way that the family had treated me during the time of my conversion.”

Professor Yasir Suleiman, founding director of the Prince Alwaleed bin Talal Centre of Islamic Studies at Cambridge, said there is a conflict between what is religion and what is culture for converts. The report also points to negative media pressure in the UK. The professor said that white women converting to Islam were more ‘visible’ in society and that wearing scarves made them stand out.

He said: “The question of dress, the hijab is an important one.

“I think there is a difference between wearing the hijab and being ‘worn’ by the hijab. Not every convert wears the hijab. It depends on how you feel about the faith and the culture you live in. Locality is a factor. If you live in a small town, initially it’s harder to wear the hijab than if you live in London, because you can just disappear in London.”

The report was put together after three weekend symposiums in Cambridge and is expected to inspire further studies – including one about male converts.