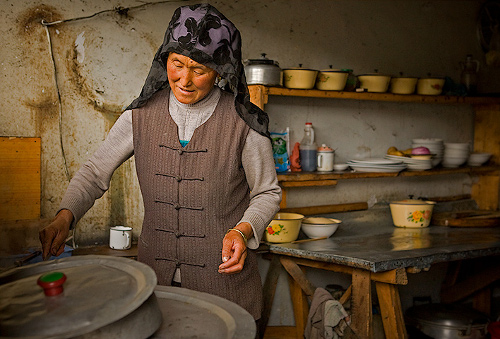 Hue Muslim at work in the kitchen / Source: www.trekearth.com

The New York Times recently came under fire for reporting on a controversial study published in the journal PLoS One, which linked a decline in time spent doing house chores to obesity in women.

Because the research focused on house work and females only, women around the country decried it as sexist, tweeting their outrage at the New York Times for publishing the article.

But what critics failed to note was the research was a follow-up to a 2011 report on physical activity in the workplace.

The 2011 data, compiled using information from U.S. Bureau of Labor Statistics, revealed the average worker in the U.S. had become significantly less active over the past 50 years, burning approximately 150 fewer calories a day. The only problem with the research was, because women were not a significant portion of the workforce 50 years ago, most of the study data was on men only.

“Fifty years ago, a majority of women did not work outside of the home,” Edward Archer, a research fellow with the Arnold School of Public Health at the University of South Carolina in Columbia, and lead author of the new study, told the New York Times.

So, to answer the question of whether or not women are also spending more time being sedentary, researchers needed to look at what women were doing 50 years ago—managing their homes.

Even without taking in childcare as a consideration for exercise, the average woman today burns 360 fewer calories a day than they did in the 1960’s. And it’s no secret, the nation is struggling with an obesity epidemic.

The obesity/house chores study: Not an issue of sexism

While the data in the most recent PLoS One report focuses on women in a stereotypical role, the goal of researchers was not to be sexist, they explain, only to provide a clear view for how physical activity for both genders has changed over time. Both men and women have become less active, and less activity means fewer calories burned and thus more fat stored within the body and more probability of obesity-related issues.“Those are large reductions in energy expenditure,” Archer explained about the drop in activity. “We need to start finding ways to incorporate movement back into [the time we all spend at home.]”The conclusion is not that women should be doing more housework, but that both men and women are less physically active in day-to-day life, and this lack of physical activity may be contributing to the obesity epidemic.
Tags: chores exercise housewife housework obesity women's health