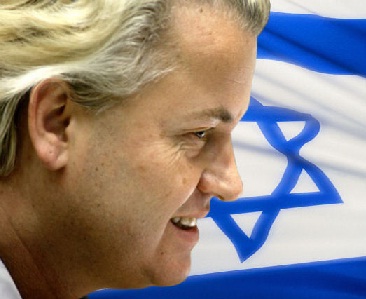 In 1880 a German professor Heinrich Von Treitschke laid the “scientific” foundations of anti-Semitism. He warned of the increasing Jewish immigration to Germany, declaring that Jews are a strange element in Germany, and that they do not want to enter into the life of the country, and are incapable of doing so.

The Israeli writer Shmuel Attinger said in his book The history of Jews in the modern era (in Hebrew) that some of the causes which led to the emergence of anti-Semitism were: a condemnation of the Jewish religion by some; a view that Jewish particularisms were a barrier to assimilation; and that Jews were not capable of integrating into the society in which they lived.

Anti-Semitism gradually spread through different sections of European society, especially when political and social organisations exploited it for political gains.

It is ironic that the visiting Dutch MP Geert Wilders is today unashamedly launching exactly the same propaganda campaign, but replacing Jews with Muslims. He is declaring that he is against Islam, saying “Islam is not a religion of peace. Islam is a totalitarian ideology”, and warning against Muslim immigration. He is playing on the ignorance of Islam, creating fear, tension and distrust. Indeed, he is taking us back to the Crusaders’ zealous anti-Islam hatred of the tenth century.

Despite his attempts to cover up his hatred and racism against Muslims, it is not hard for any thinking person to discover his contradictions, racist message and real aims. Wilders uses the tactic which late Edward Said describes in his book “Orientalism”, “the airy condescension of damning a whole people generally while mitigating the offence with a cool ‘I don’t mean you in particular'”.

The results of the Crusaders’ and the Nazis’ terrible crimes are known to us all. But as if Westerners didn’t learn anything from the Crusades and their anti-Semitic history, we are once again witnessing the racist European monster raise its ugly head, replacing Jews with Muslims. We, increasingly, see it through offensive and provocative propaganda campaigns, cartoons, films and physical attacks. And now with the help of local interest groups, they are trying to bring their poisonous hatred to Australia.

Geert Wilders is not the first anti-Muslim to visit Australia, and the Q society is not the first organisation to invite such a racist – the Australia/Israel and Jewish Affairs council (AIJAC) has been doing that for years. They invited Daniel Pipes, David Pryce Jones, Steven Emerson, Raphael Israeli and many others who all advocated anti-Arab and anti-Muslim propaganda.

ABC’s Lateline reported on 26 October 2012 that the Q Society is “a strong supporter of Israel” which “puts the Q Society in step with a number of other overseas movements, from the English Defence League to Stop Islamisation of Europe, which are all vehemently anti-Islam and staunchly pro-Israel”. The report pointed out that the Q Society has campaigned vigorously against the ‘boycott divestment and sanctions campaign’ aimed at Israel and opposed Muslims using a Melbourne community centre as a prayer hall. It stated that “both campaigns attracted support from Jews” . Indeed Geert Wilders does not hide his strong admiration and uncritical support of Israel.

An Australia in which the Q society is not able to find a venue for Geert Wilders to spread his lies and inject his racist venom in our society and in which our politicians refuse the invitation to hear his obnoxious voice and give him respectability is an Australia we can be proud of, not ashamed of, as some are trying to suggest.

We correctly refuse promoters of the hatred of Jews, Christians and other groups to enter Australia, so why do we allow promoters of the hatred of Muslims to do so? If someone said what Wilders is saying against Islam and Muslims against Jews and Judaism instead, he would not be allowed to enter Australia to spread his racism and disseminate the poison of his hatred in our society. Shame on the government for allowing this, and shame on the Opposition for keeping silent. If we are to treat all people equally, there has to be some consistency.

There is a history of Islam and Muslims in Australia dating back hundreds of years, long before even Captain Cook stepped in this land, and going up to this day. This history is the best proof of Muslims’ integration into Australian society and peaceful coexistence with the people of the land.

Yes, there are bad and extremist Muslims as there are in every religion and community, but why this concentration on Muslims? The attempt of some racists to use a trivial minority to distort the religion of over one and half billion humans and about half million strong Australians should not be allowed.

The ugly face of racism and fascism is rising and if it is not seriously confronted by all, government and people, we are condemned to repeat history as if the slogan “never again” does not apply to all of us.