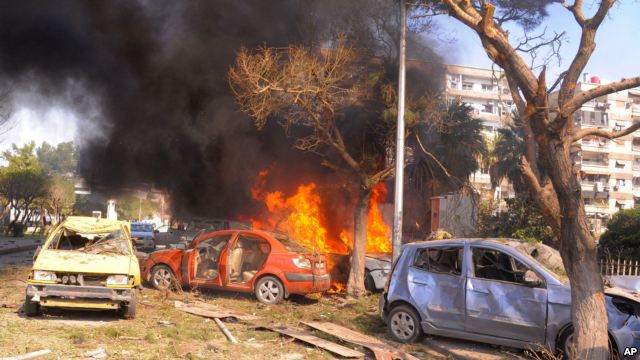 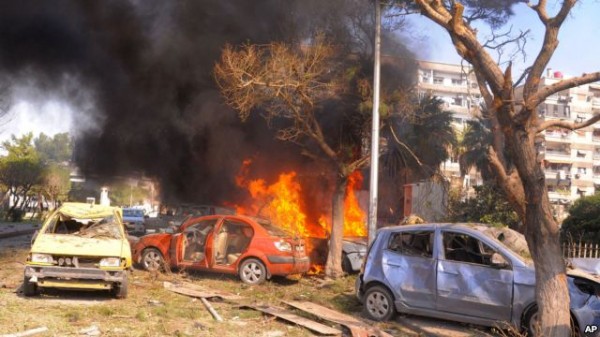 CAIRO — Syrian state media say at least 53 people have been killed and more than 200 wounded in a car bombing near the headquarters of Syria’s ruling Ba’ath Party in central Damascus.

State media called the blast a “terrorist bombing” that struck a densely populated area near the al-Mazraa neighborhood. State television footage showed bloodied and charred bodies lying along the roadside in the aftermath of the attack, which took place near the Russian embassy.

Video shows Red Crescent rescue workers picking through the rubble to rescue victims. Commuters at a major bus stop and children at a nearby school were reportedly among those killed and wounded.

A young girl, dressed in a scout’s uniform and trembling with fear, said she was thrown from her chair from the force of the blast and found herself on the ground.

Syrian state media reported that a suspect was caught nearby before he could detonate another bomb. It said the man’s vehicle was carrying five large water-heaters filled with explosives.

A number of mortar rounds, meanwhile, fell in several parts of the city center.

On Wednesday, Syrian activists said rebels shot down a warplane outside Damascus, shortly after a government airstrike killed at least 20 people in the same area.

The opposition has offered to talk with regime officials who have “no blood on their hands,” under the sponsorship of the United States and Russia. The Assad government has said it is ready to negotiate with the opposition but without pre-conditions.

However, former United Nations peacekeeping spokesman Timor Goksel said both the rebels and the government appear to be feeling more confident militarily and are not ready to negotiate.

“When both sides are confident, then there’s a stalemate,” Goksel said. “Yes, fighting is going on, but nobody is making any measurable gains, so it is sort of a frozen situation and I don’t see why anybody will give up at this time. I don’t think the fighting parties are under any pressure to reach a conclusion, yet.”

Elsewhere, the opposition Syrian Observatory for Human Rights reports that 18 people were killed at a rebel-run medical clinic in southern city of Daraa after an airstrike by government warplanes.