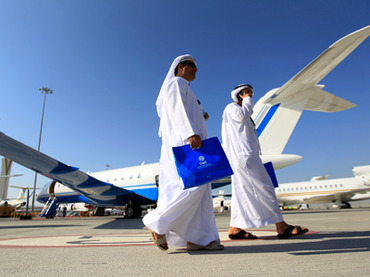 In an attempt to sway Americans’ low and undecided opinions about the United Arab Emirates, the UAE is providing millions of dollars of foreign aid to the US to rebuild schools and donate to nonprofits in storm-ravaged regions.

While the US is the largest provider of foreign aid, the UAE is writing checks for the US to help out where its own government does not provide enough assistance, the Washington Post reports.

“Tell me what you need,” a UAE embassy staffer working in Washington told a school official in Joplin, Mo., where a devastating tornado killed 161 people and destroyed six schools in 2011.

By building soccer fields and schools, donating to hospitals and nonprofit organizations, and helping in the Hurricane Sandy relief effort, the UAE is hoping to gain a better image among Americans.

After a 2006 UAE embassy survey found that 30 percent of American respondents had an unfavorable view of the emirates and 70 percent had no opinion, the country decided to change that. UAE ambassador to the US Yousef al Otaiba in 2008 began an initiative to create favorable opinions of his country among those who remain undecided.

“We had a responsibility to educate Americans about who we are,” Otaiba told the Post. “We have been in Afghanistan with you. We went into Libya. We’re the largest export market for the US in the [Middle East] region.”

But despite being an important American ally, US citizens overwhelmingly know little or nothing about the UAE. So in addition to lending a helping hand abroad, the UAE is bringing its assistance directly into American communities.

“We spot needs and we try to help,” Otaiba told the Post. And wherever the embassy believes financial help is needed, the UAE makes a generous humanitarian donation. During the past two years alone, the UAE government has funded the construction of all weather-artificial turf soccer fields in low-income neighborhoods across Los Angeles, Miami, New York and Chicago – and plans to build three more this year. The embassy also provided 2,200 Joplin children with their own MacBook laptops, spent $5 million to build an intensive-care unit at a Joplin hospital, and provided $150 million to the Washington, DC-based Children’s National Medical Center.

The UAE has also made hefty donations to numerous other hospitals and now plans to donate to food banks. Otaiba has also promised to provide about $5 million to each of the Hurricane Sandy relief efforts in New York and New Jersey.

While other countries primarily donate money to the US to promote their own languages and traditions through programs like study-abroad grants, the UAE has taken an unusual approach by donating millions of dollars to disaster relief and construction efforts that don’t directly benefit the UAE.

And even despite the country’s generous initiatives, some Americans have kept their misconceptions about the predominantly Muslim region. When public schools in Joplin accepted $1.5 million worth of donations, some conservative radio commentators and Joplin residents accused the school system of accepting “Islamic blood money”.

Still, the UAE has not given up its attempt to change American misconceptions – and US organizations continue to receive generous donations from the UAE, while their own government spends money elsewhere.

“Back then, we were getting a lot of calls from people willing to help – but nothing like this,” Joplin public school system’s Superintendent C.J. Huff told the Post. “I thought somebody was pranking us.”