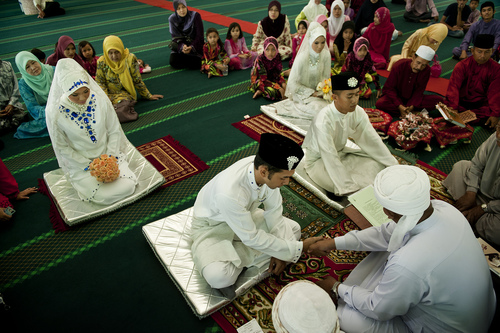 Surrounded by a global culture of hypersexuality, Muslim parents and youth share one similar concern: marriage. When to prepare for marriage, after post-secondary education or before? How to find suitable marriage partners?

Many Muslim parents still prefer the more recent tradition when it comes to marriage: waiting for young men to finish their university educations and begin successful, financially rewarding careers; and then searching for partners within a select pool and with an even more select criteria.

However, there is another option, one that is recommended in the Sunnah of RasulAllah (sallAllahu ‘alayhi wa sallam), and which has long been disregarded or has been considered to be a sign of ‘backwardness’ due to the incorrect way in which it has been practiced “back home.”

This Sunnah is that of youthful marriage.

In the famous hadeeth of Jabir ibn ‘Abdillah:

Jabir b. ‘Abdullah (Allah be pleased with him) reported: ‘Abdullah died and he left (behind him) nine or seven daughters. I married a woman who had been previously married.

Allah’s Messenger (may peace be upon him) said to me: “Jabir, have you married?”

He said: “A virgin or one previously married?”

RasulAllah’s wisdom in advising Jabir to marry a youthful woman is obvious – Jabir himself was a young man, and it would have been more fulfilling for him to have a companion of his own generation, who could be energetic, creative, and entertaining. They would have been able to enjoy the pleasures of young love, and later, mature together as they experienced life’s challenges.

There are numerous examples in the Sunnah of RasulAllah (sallAllahu ‘alayhi wa sallam) and the Sahabah that show how youthful marriages were encouraged and – more importantly – sustained.

The marriage of Ali ibn Abi Talib (ra) and Fatimah bint RasulAllah (ra) is an excellent example of a young marriage. Some sources state that Fatimah was fifteen years old at the time of her marriage while Ali (ra) was twenty-one; others say that she was nineteen.
It is known that their relationship was one of deep love; Ali (ra) never married another woman during her lifetime, and she loved him dearly despite the difficulties she endured due to their poverty. This does not mean that they did not have any disagreements, though – one of Ali’s nicknames, “Abu Turab,” was given to him by RasulAllah (sallAllahu ‘alayhi wa sallam) when Ali (ra) spent the night sleeping in the masjid due to an argument he had with Fatimah (ra). Nonetheless, they persevered and their mutual love for Allah and each other helped them overcome any issues they experienced.

Today, the very idea of a 16 or 17 year old (whether male or female) getting married is often looked upon with horror. It is argued that at this age, neither the young man or woman will have the emotional maturity to handle the responsibilities or seriousness that marriage demands, let alone its financial aspects. It is felt that both should have “the chance to live life freely,” without being tied down to another person; that they should use their youth to focus on their education without distractions. Most people conclude that very few (if any) youth are capable of handling marriage in at this young age.

However, it can also be argued that no one can ever be prepared for marriage, and there’s no guarantee that even an older person will be emotionally mature enough to handle it.

Maturity can both be innate, and cultivated. Certain individuals simply have a more mature personality, and others can be taught how to react to situations appropriately, which contributes to maturity. Thus, while no one can be truly “ready” for marriage, it is possible to be prepared for it.

It is interesting to note that while so many Muslim parents claim that their adolescent children are “not ready” for marriage, non-Muslims are pointing to rising rates of early puberty and hyperawareness regarding sexuality at younger ages. Physical and even a type of mental maturity is manifested in the way that tweens and teens evaluate the opposite gender and often begin experimenting with them sexually.

If the Muslim Ummah hopes to preserve the innocence and chastity of its youth, the only way to do so is for parents to close the gap between physical and emotional maturity.

The period of adolescence is a relatively modern construct of society, and responsible in large part for the lack of emotional maturity to be found amongst most youth in developed countries.Whereas many teenagers are expected and often allowed to act irresponsibly, Islam focuses on training children from a young age to have mental maturity and responsibility to perform various duties and obligations, both religious and social.

When Muslim parents give in to society’s current standards of behavior for adolescents, it is Muslim youth who pay the price. By lacking the mental and emotional maturity to develop the skills necessary for initiating and maintaining a long-term relationship, young Muslim men and women will be unable to enter into a fulfilling marriage by the time they begin to experience physical needs.

Teaching young men the importance of understanding how to deal with women – whether their mothers or sisters – will set the pattern for how they react to challenges with their wives. Similarly, teaching young women how to recognize which tasks, goals, or ambitions have priority will go a long way in helping them to cope with the many compromises that marriage demands from women.

It is therefore in the Ummah’s best interests, for young Muslim men and women, not just those in their early twenties but even those still in high school, to consider early marriage as a viable and practical option. Muslim parents need to focus on the reality that enabling their sons and daughters to marry at an earlier age will ultimately help them combat the vices of a hypersexualized global culture that they are struggling against.