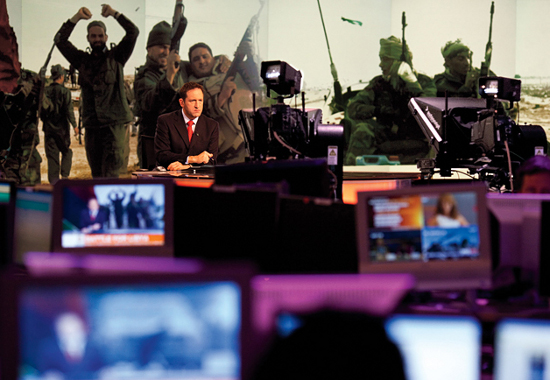 For over a decade, the Arab television broadcaster Al-Jazeera was widely respected for providing an independent voice from the Middle East. Recently, however, several top journalists have left, saying the station has developed a clear political agenda.

Aktham Suliman’s wristwatch was always ahead. Although he lived in Berlin, it always showed him the time in Doha, the capital of the emirate of Qatar — which is also the home of Al-Jazeera, the television news network that had been employing Suliman, born in Damascus, as a correspondent for Germany since 2002.

“Doha time was Jazeera time,” he says. “It was an honor to work for this broadcaster.”

One and a half years ago, Suliman, 42, re-set his watch to German time, having become disenchanted with Al-Jazeera. And it wasn’t just because the broadcaster seemed less interested in reports from Europe. Rather, Suliman had the feeling that he was no longer being allowed to work as an independent journalist.

Last August, he quit his job. “Before the beginning of the Arab Spring, we were a voice for change,” he says, “a platform for critics and political activists throughout the region. Now, Al-Jazeera has become a propaganda broadcaster.”

Suliman is not the only one who feels bitterly disappointed. The Arab TV network has recently suffered an exodus of prominent staff members. Reporters and anchors in cities like Paris, London, Moscow, Beirut and Cairo have left Al-Jazeera, despite what are seen as luxurious working conditions in centrally located offices. And despite the fact that the network is investing an estimated $500 million (€375 million) in the US, so as to reach even more viewers on the world’s largest television market — one in which its biggest competitor, CNN, is at home.

Al-Jazeera has over 3,000 staff members and 65 correspondent offices worldwide — and viewers in some 50 million households throughout the Arab world. But it also has a problem: More than ever before, critics contend that the broadcaster is following a clear political agenda, and not adhering to the principles of journalistic independence.

Such accusations have been leveled against Western broadcasters as well, of course. But the charge would place Al-Jazeera on a par with Fox News — which pursues the agenda of conservative media mogul Rupert Murdoch in the US — rather than CNN.

Objectivity in a World of Censorship

Indeed, the Arab programming of Al-Jazeera — which means “the island” in Arabic — was launched in 1996 with a noble goal: It aimed to serve as an objective medium in a world of rigorous censorship.

The network broadcast messages from Osama bin Laden, prompting outraged criticism from the US, where it was referred to as a “terror network.” At the same time, it was the only Arab medium that regularly invited Israeli politicians to debates. Its correspondents didn’t hesitate to call former Iraqi President Saddam Hussein a “dictator” — and Egyptian ruler Hosni Mubarak a “wimp.” What’s more, the network’s journalists reported on dissidents, including members of the Islamist Muslim Brotherhood, who were forced to rot in prison for years under Mubarak’s regime. Such courage and informative journalism earned Al-Jazeera a number of awards.

Since the Arab Spring, though, many former dissidents have risen to power across the region — and these fledgling leaders often show little respect for democratic principles. Al-Jazeera, however, has shamelessly fawned upon the new rulers.

Today, when Egyptians protest against President Mohammad Morsi and the rule of the Muslim Brotherhood, Al-Jazeera is often critical of them, in the style of the old pro-government TV station. Conversely, according to ex-correspondent Suliman, Al-Jazeera executives have ordered that Morsi’s decrees should be portrayed as pearls of wisdom. “Such a dictatorial approach would have been unthinkable before,” he says. “In Egypt we have become the palace broadcaster for Morsi.”

This is rather surprising considering that Sheikh Hamad bin Khalifa Al Thani, the emir of Qatar and financier of the network, used to ban such blatant influence peddling. The walls of the TV station’s modern headquarters in Doha are decorated with quotations from free-thinkers like Bob Dylan and Mahatma Gandhi.

But the emir, who also has an autocratic style of leadership and occasionally puts unwanted journalists behind bars, is having an increasingly difficult time with independent spirits working on his favorite project.

A prominent correspondent who, until one year ago, used to report in Beirut for the network, says: “Al-Jazeera takes a clear position in every country from which it reports — not based on journalistic priorities, but rather on the interests of the Foreign Ministry of Qatar,” he says. “In order to maintain my integrity as a reporter, I had to quit.”

Critics say that the emir now essentially trusts only his own people: The network’s director general is now a relative of the emir, as is the head of the advisory board. They are seemingly required to follow political guidelines laid down by the palace — instead of serving the interests of viewers. Thanks to its oil wealth, Qatar is blessed with the world’s second highest per capita income, and it’s a key geo-political player with a clear agenda.

When, for instance, mass protests were staged against the neighboring regime in Bahrain, a close ally of the emir, Al-Jazeera almost entirely ignored the situation. In Syria, on the other hand, where Qatar supports the Islamist-leaning opponents of President Bashar Assad with money and weapons, the network’s journalists are extremely close to the rebels. Such proximity can be dangerous in every respect, even lethal — as suggested by a widely circulated online video.

The images show an intersection near Daraa, in southern Syria. A member of the opposition Free Syrian Army, wearing a bulletproof vest, runs across a street on the outskirts of Bursa al-Harir, which has been besieged by troops loyal to the Assad regime for the past nine months. A second man, wearing a sweatshirt but no special protection, follows his lead. From a Syrian army checkpoint located a few hundred meters away, soldiers open fire and a number of shots bring down the man in the sweatshirt.

His name was Mohammed al-Musalma and he was 33 years old. He had been working for Al-Jazeera under the codename Mohammed al-Horani since April 2012. He was regularly paid by the network and was reputed to be one of the most experienced citizen journalists in Daraa and the surrounding area. Musalma was one of numerous local activists who film as much as possible in the hopes that Al-Jazeera will decide to broadcast some of their footage.

His death has raised questions. For one, running across a wide street in view of an enemy checkpoint is extraordinarily risky. And, while it makes sense that Musalma was not wearing anything clearly identifying him as a member of the press — reporters in Syria are advised against doing so — established media organizations outfit their staff members with safety equipment, including bulletproof vests. Al-Jazeera, however, would seem not to prescribe this kind of protection for local activists who serve the broadcaster as inexpensive part-time correspondents.

Suliman says that he and a number of colleagues broached this topic during a visit to the headquarters in Doha a few months before Musalma’s death. “If a differentiation is no longer made between activists and journalists, then that poses a danger to everyone,” he says.

According to Suliman, the editor in chief praised the idea of a clear differentiation. But nothing happened, he says — except that the shocking video was deleted from the Al-Jazeera website, where it first was posted.

As far back as the spring of 2011, after Al-Jazeera cameraman Ali Hassan al-Jaber was killed in Libya by government forces, the network had promised that it would examine the issue of better protection for its staff members, says Suliman. But he says that nothing was done about the problem then, either.

Despite numerous inquiries from SPIEGEL, the network has refused to comment on the allegations. The negative headlines come at a bad time for Al-Jazeera. For a number of years, its English-language spin-off has been trying to gain a foothold in the lucrative American market, but leading US cable companies have given it very little access.

Expansion in the US

At the beginning of this year, Al-Jazeera spent $500 million to purchase Current TV, which was co-founded by former US Vice President Al Gore. This struggling left-leaning political channel has been a flop with viewers and has received miserably low ratings; it can, however, be viewed in over 40 million US households.

“Of course the price is far too high for a niche broadcaster, but the Emir of Qatar wanted to finally expand in America,” says US journalism professor Philip Seib from the University of Southern California. Seib says that Al-Jazeera has been experiencing heightened competition in the Arabic home market from local broadcasters and international rivals. He believes that the expansion in the US is a logical consequence of this development.

Will the huge investment pay off? The market for foreign news continues to shrink in the US, and the public has reservations about the Arab broadcaster. Ann Coulter, the staunchly conservative US columnist, recently quipped on Twitter: “Al-Qaida could only come up with $400 million.”

Such prejudice can only be overcome with top-notch journalism. Al-Jazeera has advertised for 160 new positions in up to 10 new US bureaus and it has already received over 8,000 applications. After all, the media crisis has also cost many American journalists their jobs.

But there is also growing discontent in the US over how Doha tries to lead public opinion by the nose. Network staff recently complained that a speech delivered by the emir at the United Nations became the top story on Al-Jazeera’s evening news broadcast.

“It’s the same everywhere in the media business: He who pays sets the tone,” says TV expert Seib. Ironically, though, the news broadcaster from Doha initially aimed to be more than just a business model. According to its own description, it once aspired to be “a voice for the voiceless.”