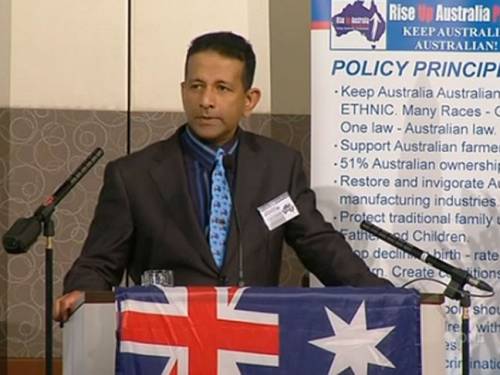 A Sri Lankan migrant has launched a political party that runs on an anti-multiculturalism platform.

Rise Up Australia already boasts about 1,500 members and plans to run 65 candidates in the upcoming federal election.

The Sri Lankan-born pastor draws on his own migrant past in defence of assimilation.

His message has the backing of international figures. “If you come here, then follow Pastor Danny’s example and enjoy it and celebrate it and do not seek to destroy it,” says Christopher Monckton from the UK Independence Party.

The leader of the new party has come under fire in the past for anti-Islamic comments, but he wasn’t backing away from making controversial statements again today.

“True Muslims are radicals, unfortunately. If they practice the Koran, they’re radicals,” he said.

If elected, Rise Up wants to restrict the number of Muslims calling Australia ‘home’.

The party has 1,500 supporters across the country, and is putting forward 52 candidates in the Lower House and a dozen in the Senate in the upcoming federal election.

Many of the supporters are concerned about what they claim is the “Islamification of Australia”.

“If we’re not careful, we’re going to lose this country,” said a supporter. “I don’t want to see Sharia Law in Australia,” said another.

“Nobody wants to impose Sharia law in Australia, I mean, far from it. That’s the last thing that anybody wants to do”.

The Vice-President of the Muslim association insists it’s a free country, and supporters of Rise Up can vote as they chose.

“If they want to try and get any mileage on the backs of Muslims, and blame Muslims for all the ills of Australia, then I think that itself is very short-sighted of them,” he said.

But he says it’s sad that someone would exploit Islam for political gains.

Danny Nalliah, born in Sri Lanka, migrated to Australia in 1997. Ironically his immigration to Australia was due to Australia having a multicultural policy, that the party he leads now opposes.

Nalliah is the founder of Catch the Fire Ministries and has previously run for public office as a member of the conservative Family First Party.

He was asked to leave the party after the 2004 Federal election after publishing a brochure asking Christians to pray that God would destroy “Satan’s strongholds” including brothels, casinos and mosques.

He later claimed that the discovery of a Satanic altar near Canberra suggested that the Federal government was “under attack” by the forces of witchcraft.

He gained prominence in Australia after making statements speculating that Victoria’s Black Saturday bushfires in 2008 were God’s response to the state’s decriminalisation of abortion.

Nalliah later claimed that the 2011 Queensland floods were the result of Brisbane MP Kevin Rudd making negative comments about Israel a month earlier.