EVERY year, more than 5,000 Brits convert to Islam.

More than half of those who make the switch are white – and 75 per cent are women.

But what would make someone want to change their lifestyle so dramatically? Police Community Support Officer Jayne Kemp left her Catholic roots behind after “falling in love” with Islam while helping victims of so-called honour violence.

Here EMILY FOSTER, JENNA SLOAN and EMILY FAIRBAIRN speak to Jayne and three other women about why they decided to become Muslim.

JAYNE KEMP patrols her beat wearing a traditional hijab headscarf and even works extra time after shifts so she can attend Friday prayers at her mosque.

Devout Jayne converted to Islam last April and even plans to change her name to Aminah.

The single mum, who patrols Eccles, Gtr Manchester, as a Police Community Support Officer, says: “I thought Islam was all about women being forced to slave away in the kitchen — but I found out it was about being generous with your time, and patient and respectful of others.

“As I looked into it, I saw similarities with Catholicism and noticed values such as looking after your neighbours and cherishing the elderly, which is something older people say younger people don’t do any more.

“I wasn’t looking for any religion at the time but for every question I had answered about Islam, I had five more. I think I fell in love with it.”

Devoted Jayne even missed out on celebrating Christmas with her son, nine, and daughter, seven. She sent them off to their dad’s and cooked her own meal so it would be halal — the meat slaughtered in the manner prescribed by Sharia law.

And despite the drastic change, Jayne says colleagues at Greater Manchester Police and her family have been supportive. She is now helping to design a regulation police hijab and tunic — as one has never been needed before.

Jayne says: “I was worried about what my colleagues would think but they have been so understanding.

“People in Eccles have been great too — most don’t even mention it. If my children had struggled with me covering my hair I wouldn’t have done it.

“They have both asked a lot about it but I would never push Islam on them and they will be brought up Catholic.

“I just hope by speaking out I can show it is OK for a Muslim woman to work in the police force and change negative Islam stereotypes.

“My family, in general, are supportive. If I’m happy, they’re happy. My sister said I’m the happiest she’s ever seen me.”

Jayne was inspired to convert to Islam after chatting to other Muslims on Twitter.

He said: “I was humbled Jayne was asking me these questions.

“She has found this religion for herself and hopefully it shows Muslims can mix in society without compromising their faith.”

ALANA BLOCKLEY, a media student who lives in Glasgow, converted to Islam after meeting her husband Abdul on holiday in June 2010. She says:

My family are all travellers and we live on a caravan site. I was baptised as a Christian but church and religion were never a big part of my life.

I was 18 when I decided I wanted to go out to the Canaries. I wanted to work as a club rep and have the experiences people say you should when you’re young.

I arrived in Fuerteventura and after a couple of days, a hotel maintenance man offered to take me out for a coffee. He was Abdul, a Muslim from Morocco. 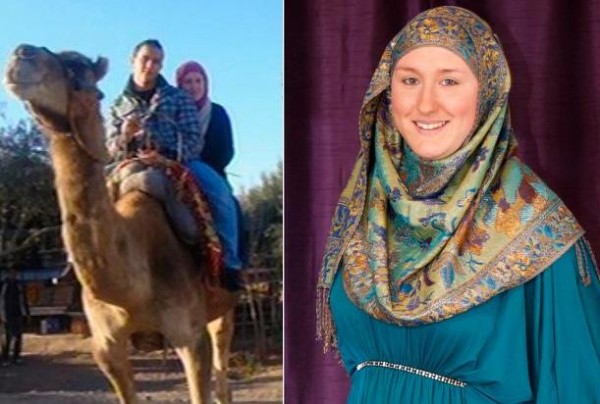 Preaching to the converted … Alana, right, and pictured wih her husband Abdul

When I got home he asked me to come back and visit him – and after three visits we knew we wanted to be together.

I started to research Islam because I wanted to know more about his life.

I decided I wanted to convert. I was worried about telling my parents and burst into tears. Mum thought I was pregnant and my dad thought I’d crashed my car.

I started to wear the hijab last summer. We got married in a Muslim ceremony earlier this month in Fuerteventura.

I miss eating Parma ham but I don’t miss alcohol.

I celebrate Eid now, but I compromised with my parents and we all had a halal Christmas dinner.

I hope I’m going to heaven now and I like the rules of Islam.

After my heart was broken by a Muslim man, I wanted nothing more to do with the religion – I thought it was cruel and unkind.

But my mum started looking up more about Islam and pointed out the way this man had behaved was contrary to the faith’s teachings.

I read up on it and discovered that Islam actually promotes tranquillity and peace.

I wasn’t religious before I converted. I didn’t really believe in God. I now cover my hair and wear a hijab, which was a big decision. My dad doesn’t like it, though, and I don’t wear the hijab when I’m with him.

At first I got some stares and nasty comments but in the past six months I’ve grown in confidence. Now I go to the mosque once a week and I pray every day.

I also took a Muslim name, Safir, but I still use my old name of Claire too. I have a new partner too, who is a Muslim, but we’re not settling down just yet.

Islam has made me calmer and, for the first time in my life, I feel accepted.

There’s not much I miss about my old life, except the odd sausage roll – I can’t eat pork now.

AYESHA OLUMIDE, from Edinburgh, is a model who works under her original name of Eunice. She converted to Islam in 2009 while at university. She says:

Before converting to Islam I was a Christian – but where my family is from in West Africa, Islam and Christianity are both practised. But it wasn’t until I started studying philosophy at university that I began to learn more about Islam.

At first I was worried it would be too extreme but when I studied the Koran it blew my mind. The theories about nature and science appealed and I felt enlightened. You can’t always explain everything in a scientific way and Islam helps me with that.

I was first scouted as a model while a 15-year-old tomboy. I was into football and athletics – but a career in fashion is all about looks. Converting to Islam made me realise how much we value people if society thinks they’re beautiful.

At the mosque, women cover their head and dress modestly, so no one is judging you on what you look like. At first I found it hard to square being a Muslim with being a model. But I spoke to a Muslim sister and she said Islam is not an extreme religion, so if it felt too extreme to me it probably wasn’t right.

Now I cover my hair for 99 per cent of the time but if I don’t want to when I wake up one day, I don’t. And I don’t do any bikini or underwear shoots.

I don’t have set days at the mosque but I do go often and I pray every day. I would like to start a family in the future but don’t think I’d marry a non-Muslim.