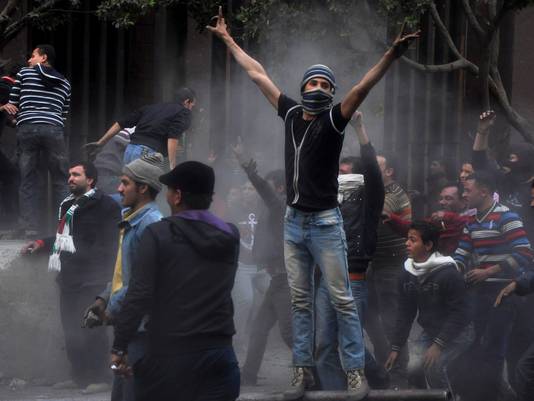 CAIRO — Egyptian protesters have clashed with riot police in Cairo’s Tahrir Square, where thousands of demonstrators have gathered to mark the second anniversary of the uprising that brought down longtime leader Hosni Mubarak.

The skirmishes began early Friday after youth protestors tried to approach a concrete wall that security forces had erected to secure government buildings in the area.

Demonstrators threw incendiary devices and rocks at police, who responded by firing tear gas and setting some of the protesters’ tents in the square on fire.

The secular-leaning political opposition has called for protests Friday against President Mohamed Morsi and the Islamist Muslim Brotherhood party. Opposition leader Mohamed ElBaradei has used his Twitter account to call on protesters to “finally achieve the objectives of the revolution.”

In Tahrir Square, the mood was less joyous than two years ago, when Egyptians seemed to surprise even themselves with a show of popular power against an entrenched leadership.

Protesters who have taken to the square countless times in the intervening time, spoke with resignation of the struggle that continues.

“ We are here on the 25th of January not to celebrate  not to support any party [or] movement, but to resume our uncompleted revolution,“ said a young protester who gave his first name, Zain.

The views of Zain were seconded by an elderly man who came from Aswan in the south to join in the rally. Mokhtar said his country has merely replaced one uncaring leader with another.

“Where is the democratic?” he asked. “We are changing Mohammed Hosni Mubarak [for] Mohammed Morsi only. We don’t have anything corrected from Mohamed Morsi since eight months.”

But even as the crowds gathered around the tents and banners that have made Tahrir the continued center of unrest, the leader of President Morsi’s political party spoke of what had been accomplished in the past two years.

Hussein Ibrahim, head of the Freedom and Justice Party said Egypt marks the second anniversary with two “achievements of immense importance: an elected civilian president and a constitution approved by the Egyptian people.

The controversial constitution was adopted in a referendum late last year after Morsi assumed temporary sweeping powers.  His decrees sparked violent clashes between the opposition and the government’s Islamist supporters.

The president still has a loyal following among the Brotherhood, the nation’s best-organized movement.  Leaders called for charity work, rather than street rallies Friday, a decision that appeared aimed at lowering the potential for clashes.

The divisions are not just between those two groups.  There are also those who look nostalgically at life before the revolution, when stability, if not vibrancy, was for many a given.

But Friday was a day for the people of Tahrir and their counterparts across the country.

Everywhere were signs celebrating the revolutionary youth, and denouncing the aging leadership of the Brotherhood.  One protester, Mohammed Ibrahim Garib, said the generational divide is a problem not just in Egypt, but across the Arab world.

“We are the future,” he said. “So enough with the old people.”