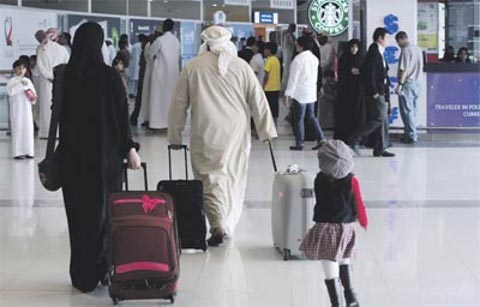 Indonesia’s Tourism and Creative Economy Ministry is set to leverage the country’s potential of sharia tourism this year in a bid to capture the expanding number of global Muslim travelers, especially tourists from the Middle East.

Sharia tourism is leisure and travel that complies with Islamic law, such as the provision of cuisine and beverages that contain no pork or alcohol, and the separation of men and women at tourist events and sites.

The ministry’s director for meetings, incentives, conventions and exhibitions (MICE), Rizky Handayani, said recently that the government, together with travel agencies, hotels and restaurants, was planning to promote and create tour packages aimed at Muslim travelers.

“Sharia tourism is very promising because spending by Muslim tourists is growing faster than the global rate, and is forecast to reach US$192 billion globally per year by 2020,” said Rizky.

“As a rich and beautiful Muslim-majority nation, we have to be able to tap into this market,” Rizky said, quoting a new study conducted in 47 countries by Singapore-based halal travel specialist Crescentrating along with DinarStandard, a US-based firm that tracks the Muslim lifestyle market.

According to the study, Muslim tourists globally represented a major niche market worth $126.1 billion throughout 2011. The demand is expected to grow by 4.8 percent annually through 2020, compared to the global average of 3.8 percent.

“Sharia tourism is not complicated. Basically, we just need to include what Muslim tourists need when traveling, such as hotels that have a kiblat sign [direction to Mecca], a prayer mat, halal food, a toilet with washing facilities and a tour that includes daily prayers,” said Rizky, adding that sharia tourism was not a religious or pilgrimage journey.

Halal means permitted or lawful according to Islamic law, which forbids consuming the flesh of swine or alcoholic drinks.

According to the Central Statistics Agency (BPS), the number of Muslim travelers from four major countries — Egypt, United Arab Emirates (UAE), Bahrain and Saudi Arabia — to Indonesia rose 13.11 percent between January and November 2012 compared to the same period in 2011.

The BPS also revealed a 30.5 percent increase in travelers from Egypt, the highest among the Muslim countries, even though the number was relatively small, from 3,259 in the first 11 months of 2011 to 4,235 in the same period last year.

Even though the number was small, Rizky said Muslim travelers were long stayers, spending 10 to 14 days in Indonesia, a week longer than their Asian and Australian peers.

“But, it does not mean that Muslim tourists cannot go to Bali and enjoy a trip there. Sure they can, because we encourage the industry in Indonesia to provide services for people who are concerned about sharia,” she said.

Contacted separately, Indonesia Tour and Travel Agencies Association (ASITA) chairman Asnawi Bahar said that introducing sharia tourism was a breakthrough in Indonesia’s tourism, given the fact that economic turmoil in Europe and the United States was unlikely to abate anytime soon.

However, Asnawi said the government would need to intensively cooperate with hotels, tour agencies and restaurants in order for the program to be successful.

“We urge the government to provide certain facilities to the industry so that we can provide the best services to sharia-concerned travelers. We also need to conduct large-scale promotion campaigns to better tap the market,” he said.