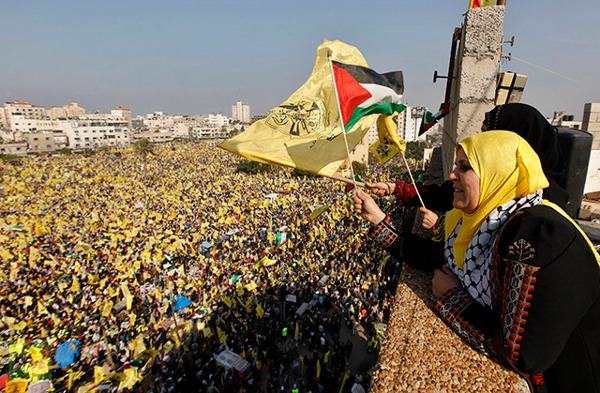 Tens of thousands of Palestinians from the Fatah faction held a mass rally in Gaza Friday for the first time since the rival Islamic militant group Hamas seized control of the territory in a brief civil war in 2007.

The more moderate Fatah rules the West Bank, but as peace talks with Israel have deadlocked, it has sought reconciliation with Hamas.

Fatah leader and Palestinian President Mahmoud Abbas addressed the rally via television from his headquarters in the West Bank town of Ramallah.

Abbas said Fatah and Hamas must work together for unity because it is the only way to achieve Palestinian national goals and victory.

Hamas spokesman Sami Abu Zuhri hailed the rally as a success for both Fatah and Hamas. He said the positive atmosphere is a step toward regaining national unity.

But the emerging reconciliation worries Israel and the West because Hamas refuses to renounce violence and recognize the Jewish state. Israel, the United States and the European Union consider Hamas a terrorist organization.

Egypt has tried to broker a power-sharing agreement between Fatah and Hamas, but deep divisions remain and a deal has been elusive.

Egypt plans to invite the rival Palestinian factions to a new round of negotiations in Cairo later this month.