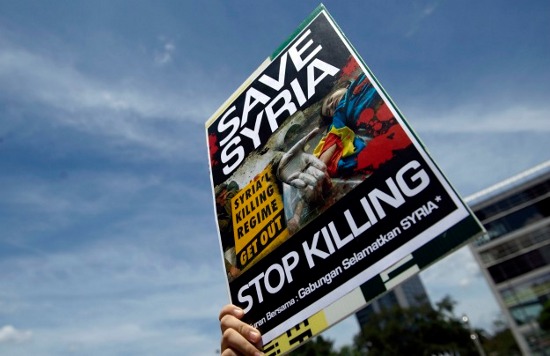 Over five months of analysis, researchers cross-referenced seven sources to compile a list of 59,648 individuals reported killed between March 15, 2011, and Nov. 30, 2012.

“Given there has been no let-up in the conflict since the end of November, we can assume that more than 60,000 people have been killed by the beginning of 2013,” Pillay said. “The number of casualties is much higher than we expected, and is truly shocking.”

The figure is a third higher than that provided by opposition activists, who put the death toll at 40,000. The last death toll provided by the UN stood at 20,000.

Reports of those killed do not take into account the number of Syrians injured or those displaced in the conflict. Many have fled to the neighboring countries of Turkey, Lebanon, Jordan and Iraq, while others have been forced to migrate internally from rural areas to urban ones, or from city to city.

As of Sunday, the total number of registered refugees and individuals awaiting registration with the United Nations (UN) was 568,958. Twenty percent were said to be under the age of eleven, while a little over 20 percent of the refugees were of ‘adult’-age, between the ages of 18 and 59.

The Office of the United Nations High Commissioner for Refugees (UNHCR), in their weekly report Sunday, said there were 170,637 Syrian Refugees in Lebanon. While this figure includes the 126,724 registered refugees, and the 43,913 scheduled to be registered, it does not mention those that have fled from Syria but have not chosen to register with the UN for support.

Thousands of Syrian citizens, forced to leave their homes, are reported monthly, but the numbers of those that do not cross borders or choose to register are difficult to track.

On 18 December, the Palestinian ambassador to Syria had said that over 95 percent of Palestinians in the Yarmouk refugee camp near Damascus had fled under heavy shelling. It was reported that more than 1,000 Palestinians from the camp had arrived at the Lebanese border crossing point that day.

The Palestinian refugee camp had been overtaken by Syrian rebels on 16 December and fighting continues.