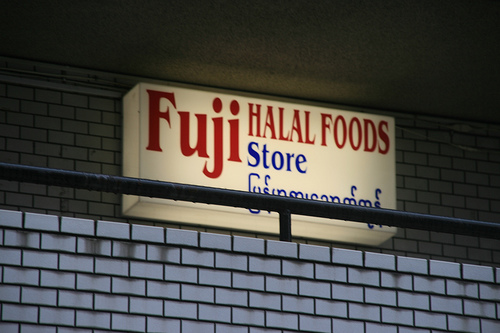 Seeking new opportunities in a global market said to be worth over $600 billion, Japanese food and tourism businesses are turning their eyes to Muslim consumers and starting to offer food and other products and services that follow the Islamic rules of halal.

In a dimly lit Japanese restaurant near Tokyo’s Roppongi district, seven Muslim tourists from Malaysia gathered to enjoy “yakiniku” grilled meat that had been specially prepared and served according to Islamic Sharia law.

For those reserving the halal fare at the restaurant in advance, halal beef placed in a separate freezer is served with plates and glasses that are kept in cupboards apart from other dishes to avoid direct and indirect contact with pork and other nonhalal food.

Ahmad Khuzaimi Abdul Rashid, a tourist from Malaysia who visited the Sumiyakiya Nishiazabu eatery, said, “If it were not for these restaurants, I would need to go for vegetarian or Malaysian food” to be certain the food was halal, despite being keen to taste local Japanese cuisine.

Halal means permitted or lawful according to Islamic Law, which forbids consuming flesh of swine and alcoholic drinks as well as charging and paying interest, among other things.

In terms of meat, animals need to be properly slaughtered by following such procedures as severing veins in the neck with a sharp knife to minimize pain and reciting the name of God, or Allah.

Sumiyakiya started offering halal yakiniku in March after obtaining a certificate from a halal consulting firm in Japan. Since then, the shop has been flooded with inquiries and seen the number of Muslim customers rise by 20 percent in about nine months.

“Japanese are keeping their purse strings tight because of economic slowdown. On the other hand, affluent Muslim customers are ready to spend money on meals, but there aren’t places for them to eat out. I think there are good business opportunities here,” said Roger Diaz, a 44-year-old native of Sri Lanka who heads the restaurant.

According to the U.S. Halal Association, the total global Muslim population is estimated at 1.6 billion, or around 25 percent of the world’s population, with the $632 billion halal food market accounting for 16 percent of the global food industry.

The number of visitors to Japan from Indonesia, home to the biggest Muslim population in the world, as well as from Malaysia, where about 60 percent of the population is Muslim, jumped between 2003 and 2010, according to the Japan National Tourism Organization.

The JNTO says the number of Muslim travelers to Japan is generally on the rise, although official data on Muslims are not available.

Seeing it as a business opportunity, some Japanese nonprofit organizations as well as private firms have started offering services assisting Japanese businesses to obtain halal accreditation.

Malaysia Halal Corporation Co. based in Tokyo and headed by Akmal Abu Hassan, 42, a Malaysian Muslim, is one of them.

Since its foundation in 2010, the company has issued its own halal certificates for six hotels and eight restaurants in Japan, including Sumiyakiya, by examining whether their food, including seasonings and additives, is prepared in accordance with Islamic law, including the ways in which the ingredients are stored.

Hotels certified by the firm also provide information about “qibla,” the direction of Mecca for prayers, as well as restaurants that serve halal food.

Malaysia Halal Corporation, recognized as an internal auditor of halal by Malaysian and Indonesian government-affiliated bodies, conducts unannounced inspections for all the facilities it has issued certificates to once every two or three months to maintain quality.

“People in Malaysia are aware (of the charms of) Japan, including its world heritage sites and culture, and are eager to visit here, but is it a place where (Muslim) foreigners can easily visit? No,” said Akmal, pointing out complaints from Muslim travelers that they ended up eating at Malaysian restaurants since they were unable to find halal Japanese food.

“Japan should promote itself more aggressively by making its cuisine available for people opting for halal food,” he said, adding Japanese businesses can find new opportunities by exporting their food and cosmetics among other halal products to Islamic countries.

Hideshi Matsui, a Japanese Muslim and president of the travel company, said single-use cups and plates are used at restaurants during the tours to avoid possible discomfort.

Destinations are also carefully chosen as some tourists expressed disgust after visiting cherry blossom viewing sites where many local people were drinking alcohol, he said.

“Without understanding Muslim people’s way of life and their beliefs, we cannot gain understanding from them and it could even be dangerous,” said Matsui, adding such tours have received a number of reservations, even though their prices are set higher than average.