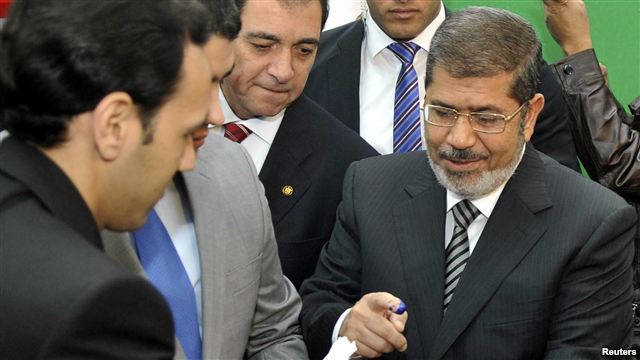 Egyptian voters have overwhelmingly approved a new Islamist-backed constitution, in a referendum in which less than one-third of eligible voters cast ballots.

However, the official turnout among Egypt’s 52 million registered voters was just under 33 percent.

Officials said they found no electoral violations during the two-stage vote serious enough to change the final result.

Supporters of the charter – including President Muhammad Morsi and the Muslim Brotherhood – say the constitution should lead to stability and economic revival.

With the document approved, the stage is set for lower house parliamentary elections in around two months.

Pro-reform opposition supporters continue to reject the constitution, saying it falls short of guaranteeing universal rights and protections for women and minorities, and could lead to Islamist interference in lawmaking.

The opposition has questioned the legitimacy of the constitution because of the paltry turnout.

The United States, which provides billions of dollars of annual military and other aid to Egypt, has reacted to the result by calling on President Morsi to “bridge divisions” among Egyptians.

The State Department said in a written statement that “the future of Egypt’s democracy depends on forging a broader consensus behind its new democratic rules and institutions.”

The statement added that Washington has “stood with Egyptians as they have engaged in the difficult work of democratic transition” since Washington’s former ally Hosni Mubarak was ousted as Egyptian ruler in February 2011.

The European Union’s foreign policy chief Catherine Ashton took note of both the strong majority backing the constitution, as well as the low turnout.

In a written statement, Ashton also urged President Morsi to intensify efforts for a dialogue with pro-reform supporters opposed to the constitution.

The turmoil of the past two years in Egypt has severely damaged the country’s economy, with foreign direct business investment, tourism and foreign currency reserves all declining sharply.

Amid concerns about capital flight, Morsi has signed a decree banning people from leaving Egypt with more than $10,000 or its equivalent in other currencies.

Reports say some Egyptians have begun withdrawing their savings from banks because of growing uncertainty.

Until the elections in around two months, the Islamist-dominated upper house, the Shura Council, will hold legislative power.

A spokesman for the Muslim Brotherhood’s Freedom and Justice Party, Murad Ali, said preparing for the elections and taking measures to revive the economy will be priorities in the coming weeks

Opposition supporters have vowed to continue their fight to change the charter and ensure greater social and economic freedoms.