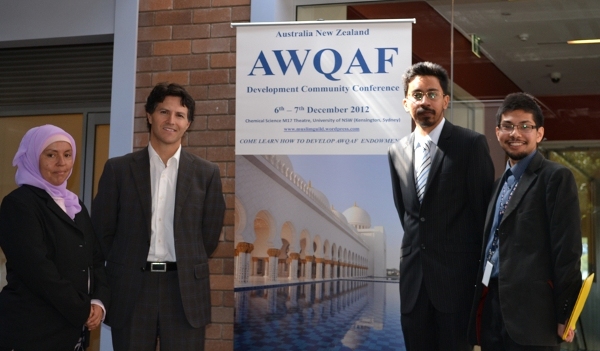 The Conference started with a quick identification of Australian Muslim community needs and corresponding resource gaps that hinder those needs from being met. When identifying potential solutions to bridge those resource gaps, Awqaf was recognized as being more sustainable and one that empowers the Muslim community to be independent and self-reliant. There were calls for Australian Muslim community to pursue a strategy of developing Awqaf to the level where the community is able to meet at least eighty percent of their needs through its Awqaf.
The conference was opened by the Hon. Victor Michael Dominello, Minister for Multiculturalism. The Minister congratulated the Guild on launching this initiative. He iterated his support for Awqaf and stressed that the Muslim community needs to develop their own resources to become less reliant on the government. He said that his department is willing to assist the community to develop these structures.

Dr Salim Farrar, a senior lecturer at the University of Sydney Law School said that it is essential to work out the viability of Awqaf within the Australian legal context, instead of taking an utopian approach. He recommended that Awqaf practitioners here consult with accountants, taxation officers and lawyers and to design each enterprise with the legal system in mind.

The conference emphasized that business models of development should be adopted to deliver effective auditing and accountability practices. Dr Radzi Jidin, a senior lecturer at the UNSW School of Business made this point clear despite acknowledging that there are no specific rules when it comes to auditing for the Non-for-Profit Organisations. He recommended that every Awqaf enterprise have an independent auditor. He also shared that accountability can be better addressed through the active participation of beneficiaries which is the community at large.

Presentations were made, showcasing the growth and development of Awqaf projects both in Australia and New Zealand. The models of Awqaf Dubai promoting growth of Awqaf through competitive business ideas and prudent management have been identified as critical. It was also recognised that amongst the global Awqaf agencies in North America, Europe, Middle East, South East Asia, South Asia, the strategic directions of GCC countries are most valuable for ANZ region.

The conference attendees included Awqaf agencies, service providers, civil society leaders, entrepreneurs, students and community development workers. This led to robust discussion in each session. In fact, it was the participants who led some of the sessions on resource building. Awqaf New Zealand Presenter and Chairman Mr Ismail Waja told the audience that he had been to other Awqaf conferences around the world and in his opinion, this was the conference where he gained the most learning experience. The conference organising secretariat pointed out that the conference format was of three aspects: Firstly it was applied in contrast to being descriptive or theological so that it provides more guidance on actual Awqaf development. Secondly a working conference nature so that people can come and work on their ideas and strategies. Thirdly it was targeted largely at those who are more likely to start up or further Awqaf development efforts within next twenty four months.

A session on “Where to from here” set up several milestones to be achieved within the next 6 months. Delegates agreed to return for further discussion and an update on the Awqaf development process. In particular, the Guild will move to develop the ANZ Awqaf Development Research and Advisory council. Many of the conference experts have accepted an invitation to join the council.

The Guild plans on holding the next workshop in June 2013 to evaluate the progress of Awqaf developments in Australia. Furthermore, the annual conference will be held in December 2013 and will focus on the theme of “The Strategic Revival of Women’s Role in Awqaf Development”.