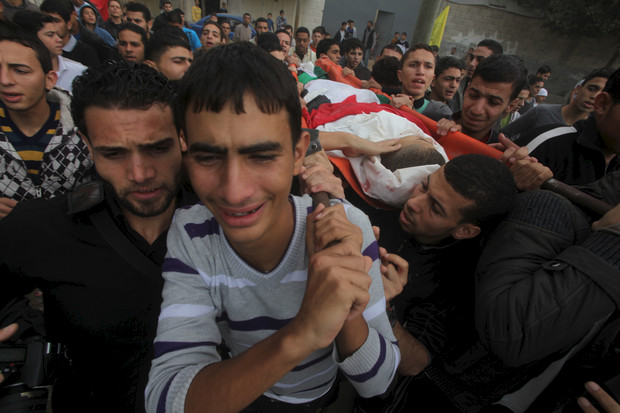 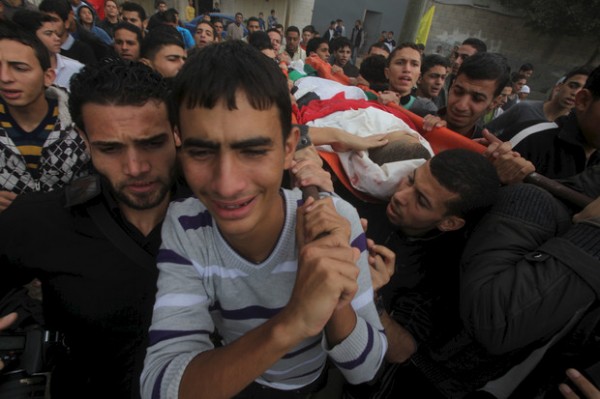 One of the most consistent aspects of the BBC’s reporting of Gaza and Israel is the insistence of its journalists that any “outbreak of violence” is the fault of the Palestinians.

When Israel bombs or shells Gaza, this is unfailingly reported by the BBC as being in “response” or “retaliation” to rockets being fired from the blockaded territory. The unflinching regularity of this one-sided reporting by the UK’s state broadcaster is meticulously recorded in More Bad News from Israel, the book by Greg Philo and Mike Berry which contains research by the Glasgow Media Unit into the BBC’s reporting of the occupation.

The BBC’s coverage of Israel’s most recent assault on Gaza in November was no exception. An article published on the BBC’s website the day Hamas commander Ahmed al-Jabari was assassinated in an Israeli airstrike in Gaza City stated that the killing “follows a wave of rocket attacks against Israel from the territory” (“Israeli air strike kills Hamas military chief Jabari,” 14 November 2012).

The article went on to feature an Israeli army spokesperson’s claim that al-Jabari had “a lot of blood on his hands” and Israeli Prime Minister Benjamin Netanyahu’s assertion that a “clear message” had been sent to “Hamas and other terrorist organizations.” Netanyahu’s comments ended with the words: “We will continue to do everything to protect our citizens.”

All of Israel’s key propaganda messages were conveyed, while the reality was carefully hidden. There is, of course, the ongoing reality that Israel is an occupier and a serial violator of international law — facts which are buried under the credibility and authority the BBC accords to its politicians and spokespeople and what they say.

On an immediate level, another crucial reality was ignored. By assassinating al-Jabari — itself an illegal act of extrajudicial murder which the BBC failed to examine, even as it printed Netanyahu’s triumphal “clear message” — Israel had violated a ceasefire brokered three days earlier.

This information, so casually ditched by the BBC’s journalists — online, on television and on radio news — was absolutely crucial. It emboldened the lie, disseminated across the BBC’s media outlets, that al-Jabari’s killing and the eight-day onslaught that came next followed “a wave of rocket attacks” from Gaza.

It didn’t. Al-Jabari’s assassination and the ensuing attack on Gaza which killed more than 160 Palestinians, including more than 30 children, followed a ceasefire, which the Palestinian groups in Gaza had been observing and may well have carried on observing if Israel hadn’t broken it. Couple this with the fact that, in 2008, Israel broke another ceasefire to instigate a three-week massacre in Gaza, killing 1,400 Palestinians, including 352 children, and a picture builds of an aggressive Israeli state, regularly bombing and shelling a civilian population with no regard for agreed truce arrangements.

Take into account that both attacks on Gaza, in 2008 and 2012, came just months before Israeli elections, and an uneasy pattern begins to emerge — one which responsible journalists would, presumably, want to question and investigate.

Moreover, al-Jabari was killed as he carried with him, in the car that was hit, a draft agreement for a permanent truce with Israel, raising yet another vital question: was Israel trying to sabotage a possible end to the violence?

The justification for military action put forward by Ahmed to start the debate was “Hamas rocket attacks.” And this is where the debate stuck. Any attempt by Atwan to give depth or context to the discussion, by mentioning the blockade, the occupation, or Israel’s year-round attacks on Gaza, were batted away by Ahmed who unfailingly came back with the rejoinder: “But wouldn’t it all stop if Hamas stopped firing rockets?” The implication of course was that Hamas starts violence, and Israel responds because it has to protect its citizens.

That Palestinian rocket attacks might be a response to 45 years of ongoing occupation, combined since 2006 with a crippling blockade, is not a possibility the BBC is willing to discuss on its airwaves.

In just 15 minutes, the former Channel 4 News presenter revealed how completely she has attuned herself to the BBC’s commitment to the Israeli narrative by referring to “Hamas rocket attacks” 15 times, and never once to Israel’s ceasefire violations and the complicated questions these violations raise.

This fits in with what would appear to be her employer’s editorial policy on Israel and Gaza. In an email sent on 21 November to a member of the UK-based Palestine Solidarity Campaign, and seen by this writer, the BBC Complaints Department explains in some detail how the broadcaster had gone out of its way to lay the blame for the violence of the previous eight days on the Palestinians.

The email, signed off “BBC Complaints,” states: “Since the news of Israeli air strikes in Gaza our coverage has pointed out on numerous occasions that the attacks are in response to recent rocket attacks on Israel from the Gaza Strip.”

It adds: “Our initial online report on 14 November pointed to how the attack on Ahmed Said Khalil al-Jabari and another Hamas official ‘follows a wave of rocket attacks against Israel from the territory’ and how ‘the United States said it supported Israel’s right to self-defense, and condemned militant rocket attacks on southern Israel.’”

Seemingly oblivious to or unfazed by the inaccuracy of its own reporting, the message goes on: “On the BBC’s News at Ten that same evening, the BBC’s Gaza and West Bank correspondent Jon Donnison’s report explained that ‘Israel says the strike followed a wave of rocket attacks from inside Gaza,’ before hearing directly from Israeli Army Spokeswoman Lt. Col. Avital Leibovich as she explained how ‘I can just elaborate that the target of the operation is to protect Israeli civilians. The same lives of Israelis that have been under constant rocket attack for the past year.’”

In a twist of almost comic absurdity, given eight days of reporting which squarely blamed Hamas for the violence and equated the fear caused by the 12-pound and 90-pound Palestinian rockets with the terror induced by Israel’s 500-pound to 2,000-pound bombs, the email ends with: “We will continue to report on developments from the region in a fair, accurate and impartial way.”

The email highlights the BBC’s willingness to ignore facts and important questions — for example, why did Israel really kill al-Jabari? — in favor of a narrative that, deliberately or not, echoes that of the Israeli government.

Less than a week before al-Jabari’s execution, Israel had killed seven Palestinians in Gaza in the space of 48 hours. Of these, five were teenage boys (“New Israeli escalation against the Gaza Strip,” Palestinian Centre for Human Rights, 11 November 2012).

The first to die, 13-year-old Ahmad Abu Daqqa, was shot in the abdomen by Israeli soldiers. Two days later, brothers 16-year-old Mohammed Harara and 17-year-old Ahmed Harara were killed playing football when Israeli forces fired shells at their playground. As people rushed to help, three more shells were fired, and an 18-year-old and 19-year-old were killed.

It is safe to assume that if five Israeli teenagers, including two brothers playing football and a 13-year-old, had been killed by Palestinian rockets fired from Gaza, it would be headline news for the BBC.

The Israeli killing of the Palestinian youngsters was ignored on BBC television and prime-time radio news. Even when al-Jabari was killed, four days after the Harara brothers lost their lives, and some kind of premeditated build-up to the eight-day assault began to emerge, the BBC still refused to mention Israel’s two-day killing spree in Gaza a few days earlier.

All BBC journalists stuck to Israel’s official line that the assassination of 14 November, and what followed, was in retaliation to Palestinian rockets — and conveniently omitted from their reports the fact that Israel had been engaged in killing Palestinian children in the days immediately preceding al-Jabari’s execution.

The Palestine Solidarity Campaign wrote to the BBC’s flagship news and current affairs program Today on 12 November to ask why it had not covered the killing of the five Palestinian teenagers on 8 and 10 November.

The program’s assistant editor, Dominic Groves, wrote back to say: “Even in the space of a three hour program it is not always possible to cover every development in a story — especially one as long running and complex as the one in the Middle East.”

And yet the killing of five young boys by Israel isn’t a “development in a story;” it is news in itself. When the Today program can give prominent coverage to a Palestinian rocket attack on a bus in April 2011, which killed a 16-year-old Israeli schoolboy, how can Groves claim the same program has no room to report on the slaughter of five Palestinian boys by the Israeli army? (“Israeli boy Daniel Viflic dies after rocket hits bus,” 18 April 2011).

Since the latest “ceasefire” came into effect on the evening of 21 November, Israel has been flying its F-16s over the skies of Gaza, 40 Gaza fishermen have been detained by Israeli forces, and a 20-year-old Palestinian has been shot and killed by Israeli fire, while 54 Palestinians, including six children have been injured (“Protection of civilians weekly report,” UN Office for the Coordination of Humanitarian Affairs, 28 November – 4 December 2012 [PDF]).

Like the everyday struggle of Palestinians in Gaza, currently dealing with power cuts lasting eight hours each day, this has gone unreported by the BBC and other mainstream media because no one, yet, is firing rockets back.