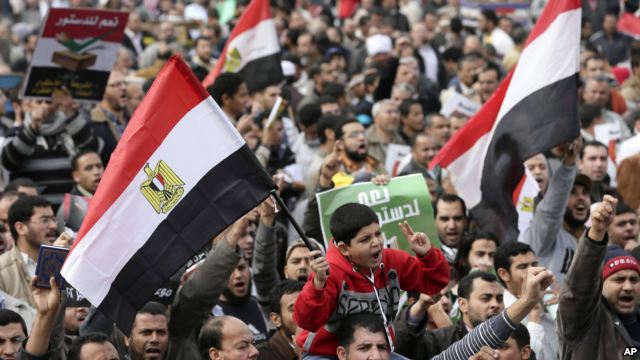 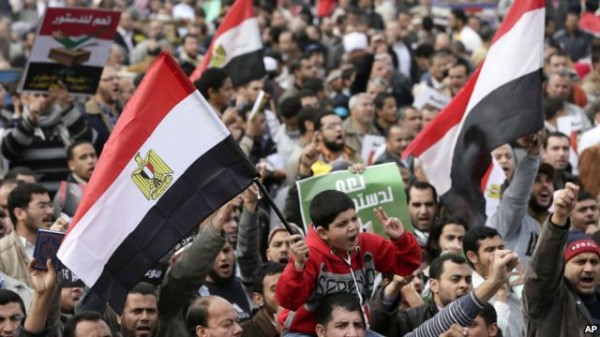 CAIRO — As Egyptians prepare to vote in the first round of a constitutional referendum Saturday, both opponents and supporters of the controversial document were out in the streets to protest.

Supporters of Egypt’s new draft constitution were the first to take to the streets of Cairo Friday, congregating in front of a mosque near the presidential palace after midday prayers. Protests were reported in Alexandria, where rock throwing incidents broke out, and Assiout as well.

In the capital, clusters of opponents of the constitution began swelling by mid-afternoon along a nearby boulevard facing the palace.

Large marches from different parts of the capital were set for later in the day. Liberal, Christian and leftist opponents of the new constitution complain that it was voted on in a hurried manner by a committee composed mostly of Islamists.

Secular opponents withdrew from the body after complaining that their voices were not being heard.

Mohamed ElBaradei, who heads the opposition National Salvation Front, has urged President Mohamed Morsi to postpone the referendum, due to begin Saturday and to be staggered over two successive weekends. He calls the constitution “illegitimate” and warns that efforts will continue to have it annulled.

ElBaradei warned Islamists not to try to impose their vision of society on all Egyptians. He said the proposed constitution and the referendum are not legitimate, and that the opposition will continue to use all peaceful, legal and democratic means to stop the constitution.

Secular activists complain the new document leaves the door open to an Islamic state, where laws and civil liberties are determined by Islamic clerics. The new document also gives the president power to neutralize the judiciary by packing the Supreme Constitutional Court with Islamists.

A spokesman for the constitutional committee which drew up the document in a marathon overnight session said a referendum is the most fair way to decide the matter. He urged Egyptians not to listen to what he calls “propaganda campaigns” and to vote to express their opinions freely and without pressure.

But on the streets of the capital, opinions are divided.

Another man, Wael, who opposes the document, says it is one-sided and unfair.

“The constitution is something wrong because it’s not our opinion about law and justice. It’s only justice for the Brotherhood,” he said.