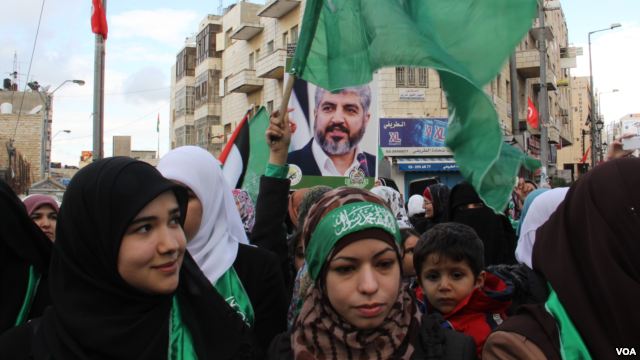 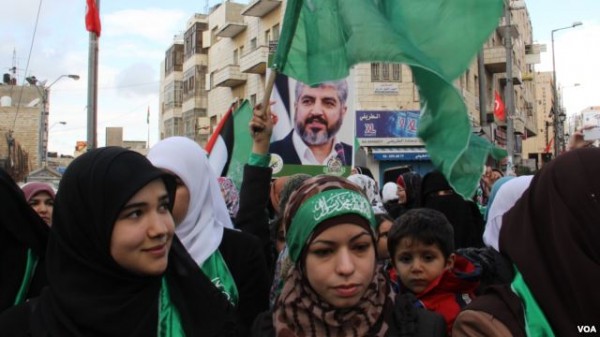 RAMALLAH, WEST BANK — For the first time since 2007, Hamas supporters flooded the streets of the West Bank to mark the Islamic movement’s 25th anniversary. Riding a wave of increasing support after the deadly exchange of fire with Israel last month, Hamas called for more rallies across the West Bank.

In central Ramallah, base of Hamas’ Western-backed rival, Fatah, hundreds of Palestinians proudly waved the green Hamas flags. A truck drove through the streets blaring out a musical chorus of “strike Tel Aviv.” Larger rallies were held in recent days in Nablus and Hebron, where Hamas has a stronger support base.

Standing with his son at the back of the crowd in Ramallah, 40-year-old Amjad Najjar said he supports Hamas because of its armed resistance against Israel.

“Today we celebrate that Hamas has fought the Israelis for 25 years,” said Najjar. “Hamas is fighting to get us our land back. Fatah has been doing peace talks for a long time, and they didn’t get us any of our land.”

Many Palestinians have become frustrated with the peace process in which they have been represented by Fatah and the Palestine Liberation Organization (PLO). Two decades after the PLO signed the Oslo Accord with Israel, Palestinians still don’t have a sovereign state, but do see hundreds of thousands of new Israeli settlers in the West Bank.

Israel has favored talks with the PLO and Fatah, but rejects Hamas as a terrorist organization that calls for destruction of the Jewish state.

“Hamas stood fast and confronted Israel,” says Dr. Samir Awad, a professor of political science at Birzeit University near Ramallah. “The Palestinian people are fed-up with the Israeli occupation and the settlers, so they will support firmly any strike against the occupation, be it military or like what [President Abbas] did in the diplomatic arena.”

While Palestinians cheered Abbas for winning recognition by the U.N. General Assembly as an observer state, little has changed on the ground. And as many Palestinians see it, Hamas’ show of defiance seems to have brought concrete gains such easing restrictions on fishermen and farmers near Gaza’s borders with Israel. These Palestinians now feel that Israel has sent the message that violence wins, not negotiations.

Nael Barghouti knows this all too well. He had spent 34 years in an Israeli prison when he was released last year along with about 1,000 other Palestinian prisoners in exchange for one Israeli soldier, Gilad Shalit. Capturing one Israeli soldier managed to free more prisoners than years of negotiations.

Barghouti is one of many West Bank Palestinians who may not align themselves with Hamas, but admire its style of resistance. As some Palestinians explain it, this why Hamas has dedicated support in West Bank territory where it has no authority.

When Hamas won the 2006 parliamentary elections in Gaza, it had clear support in the territory.  Since then it has faced challenges familiar to many governing parties. Critics say Hamas has cracked down on dissent, both from liberal opponents and more radical, Islamic challengers. It also has faced criticism over electricity and clean water supplies to the territory’s 1.5 million residents.

Samir Awad, the Birzeit University professor, said Friday’s rallies for Hamas were in part possible because such events were recently approved by the Palestinian Authority.

“Because of this [the demonstrations] we may see even more support for Hamas in the West Bank than in Gaza,” said Awad. “Maybe before a lot of people here wanted to go out and show their support for Hamas but that wasn’t allowed.”

In 2007, violence between Fatah and Hamas saw the Fatah movement kicked out of the Gaza Strip. Since then Hamas members on the Fatah-dominated West Bank have kept a low profile because they could be arrested by both Israel and the Palestinian Authority’s security forces.

“The situation now is that the reconciliation has reached a point that it’s agreed upon that Hamas can celebrate in the West Bank, and in January Fatah will hold its anniversary celebrations in Gaza also,” said Awad.

But above all, most Palestinians here say full reconciliation between Fatah and Hamas is key to Palestinians moving forward. Awad says the stumbling block to further progress toward unity between the two groups may be negotiating geographical control.

“Now we have Hamas ruling in Gaza and the Palestinian Authority here,” said Awad. “Hamas seems unwilling to give up its control of the Gaza Strip and Fatah the West Bank.”