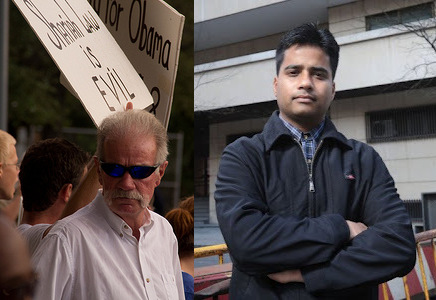 In an interview with a UK media outlet called IBTimes a Pakistan-born “Anti-Islam activist” has identified himself as the producer of yet another film slandering the Prophet of Islam, Muhammad (may God’s peace and blessings be upon him).

One Imran Firasat, a self-described “ex-Muslim” and political refugee living in Spain, claims to have produced a film entitled “The Innocent Prophet” the trailer of which is already available on YouTube.

Some media outlets, such as the IBTimes, speculate that the film could spark international outrage like previous attempts at similar material. But Firasat, who has reportedly partnered with the Florida-based “Koran burning” Christian cleric, Terry Jones, told the IBTimes that he was not acting as a “fire-starter for American Islamophobes”.

When asked whether he felt morally justified producing such a film given the violence and mass public outrage in the Muslim world that similar productions have generated previously, Firasat responded by suggesting that rather than trying to prevent him from exercising free speech that “the world should give suggestions to Muslims that you guys stop creating the violent game over small excuses.”

The film producer maintained that his motive was not to hurt anyone but rather to exercise free speech.

Yet, as fate would have it, it seems this latest attempt at free speech defense has already been curbed though not by Muslims, who Firasat states he defies with impunity – everyone from al-Qaeda to the Taliban, but by the Spanish government which determines his immigration status.

He told the IBTimes that after being threatened by Spanish authorities with the revoking of his refugee status he now lives in fear of the prospect of having to return to Pakistan. The activist has said that due to government pressure he has postponed the film’s launch, originally scheduled for December 14, until the government can review its contents.

Described as a 70-minute documentary the film’s producer insists that it is based on “facts as contained in Islamic scripture” but from the perspective of an ex-Muslim.

While Belgium has preemptively raised its security alert level, fearing an outbreak of violence, there has been little reaction otherwise.

Whether or not Muslims will take the film any more seriously than the Spanish have taken it’s maker’s immigration status remains to be seen.

This article is based on reporting by www.ibtimes.co.uk.