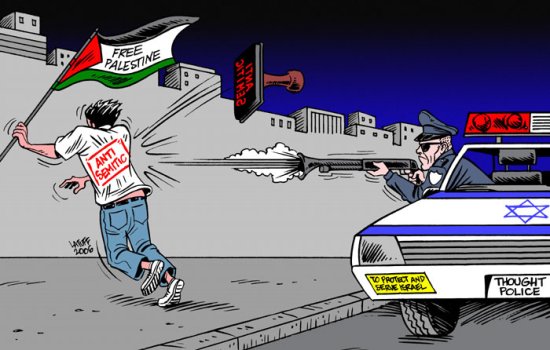 The editor-in-chief of The Age has defended a series of cartoons published over the last week, one of which the B’nai B’rith Anti-Defamation Commission (ADC) labelled as “virulent hate-speech”, that have outraged the Melbourne Jewish community.

The cartoon then states: “I did not speak out because if I did, doors would close to me, hateful mail would arrive, bitterness and spiteful condemnations would follow.”

“‘They’ of course referred to the Nazis. In Leunig’s cartoon, however, it is the Israelis who are the Nazis,” he said. “Leunig’s second anti-Semitic theme [is] that anyone who supports the Palestinians will immediately be besieged by the all-powerful Jewish lobby. This is the kind of hateful rhetoric you would expect on anti-Semitic websites, not The Age.”

A second Leunig cartoon on Saturday portrayed a character – presumably Jewish – at Mount Sinai receiving the commandment “Thou shalt not kill” before shooting both Moses and God dead, then standing on the mountain wearing God’s crown. Then a Bruce Petty cartoon on Monday, November 26, showed a boat of Palestinians with the banner “The Right of Return – UN” approaching a heavily fortified and armed Israel flying the banner “The Right to be Here – Bible”.

“This not only ignores the unquestionable fact that the UN created the modern Jewish State, but also overlooks thousands of years of Jewish history in the Land of Israel,” Abramovich said.

Defending the cartoons, Age editor-in-chief Andrew Holden said the cartoonists were all “very experienced, and well aware of the sensitivities around Middle East politics”.

“However, they are also entitled to express their personal opinions, even if these are challenging.”

The work of the artist is to express what is repressed or even to speak the unspoken grief of society. And the cartoonist’s task is not so much to be balanced as to give balance, particularly in situations of disproportionate power relationships such as we see in the Israeli-Palestinian conflict. It is a healthy tradition dating back to the court jester and beyond: to be the dissenting protesting voice that speaks when others cannot or will not.

My recent cartoon (“First they came for the Palestinians … “) was a lament based on the famous lines attributed to Pastor Martin Niemoller that neatly highlight the way apathetic or frightened silence in the face of injustice is a dereliction of moral duty. It is interesting to note that Niemoller had been an active Nazi supporter but a decade after the war became a pacifist.

Although greatly valued in contemporary Jewish culture, the poem’s message is universal and eternal; it could apply to any oppressed group, including the Palestinians who, even with their relatively feeble rockets, are so obviously oppressed.

In spite of all the highly organised rhetoric justifying Israel’s actions, the intuitive, heartfelt moral shape of the situation is becoming clearer and more obvious to the world the longer the conflict goes on. When all is said and done, it looks like the Palestinians have been massively robbed and abused, and are engaged in a desperate struggle for survival and liberation. Israel on the other hand would appear to be conducting an imperialistic campaign of oppression supported and substantially armed by the most powerful nation on earth. My cartoonist’s duty and conscience compel me to focus on the plight of the subjugated, the ones most neglected, severely deprived and cruelly afflicted.

I am not against Israel but I am opposed to what I regard as its self-defeating, self-corrupting militarist policy, which is not only excessively homicidal and traumatising but sows the seeds of irreversible hatred and can never bring a lasting peace. One expects more from a prosperous democratic country. It’s as if this young nation Israel has not yet come to maturity; so delinquent, irresponsible and unwise are its actions.

I sense that the Jewish community in this country is itself increasingly divided on the question. I also suspect that the more aggressive Israel supporters fear this moral unease and quiet doubt in their community and are angered by any cartoons or commentary that might encourage such doubt. In spite of what the bullies say, I suspect they are not really upset by any “anti-Semitism” in my cartoons (there is none) but by the possible impact of a cartoon on the doubters. The better the cartoon, the more it must be discredited. What cheaper way to discredit than the toxic smear of anti-Semitism.

I am not sure whether it is legal to publicly call someone an anti-Semite without evidence but it certainly feels like hate talk to me, as well as a damaging thing to say about someone who does not agree with you. That’s often why it is said of course.