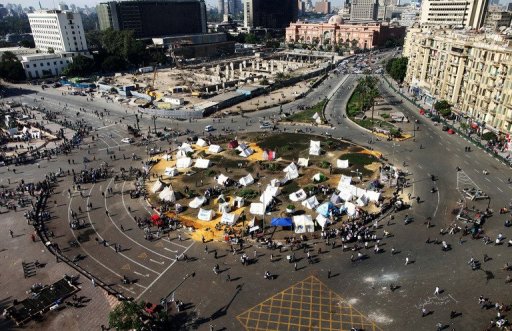 Some protestors gather at Tahrir Square.

Officials and witnesses say the unknown gunmen shot the protesters in Cairo’s Tahrir Square early Tuesday.  By midday the square was calm, with tents remaining in the center and the number of people in the area slowly growing.

Opposition leaders are pressuring Morsi to cancel a constitutional referendum scheduled for Saturday. The opposition National Salvation Front, led by liberals including Mohamed ElBaradei and Amr Moussa, has called on its supporters to march on the presidential palace in Cairo Tuesday.  They say the draft constitution does not properly represent the Egyptian people.

But Morsi has refused to back down. On Monday, he gave the military authority to arrest civilians as part of a decree to help maintain security for the referendum.  The order tasks the military with supporting police to protect “vital institutions.”  There was a heavy military presence in Cairo ahead of the planned rallies.

Many secular Egyptians fear the draft constitution will erode civil liberties because it boosts the role of Islamic law and makes no specific mention of women’s rights. A constituent assembly dominated by Islamists approved the document last month after liberal and Christian members walked out, complaining that their voices were being ignored.

Some observers say the draft constitution has a good chance of being approved because Morsi’s Muslim Brotherhood movement has a superior ability to mobilize supporters to vote.

Morsi made a concession to the opposition on Saturday by canceling parts of a November 22 decree that granted himself sweeping powers. He made the announcement after a day of talks with other political figures. Most opposition groups boycotted the dialogue.

Morsi also said that if the draft constitution is rejected in Saturday’s referendum, he will call elections for a new constituent assembly to draft another charter that will be put to a popular vote.

Egyptian troops set up concrete barriers outside the presidential palace Sunday to prevent rival groups of liberals and Islamists from holding further rallies at the site. Street battles between the two sides have killed seven people in the capital in recent days.

Some information for this report was provided by AP and Reuters.