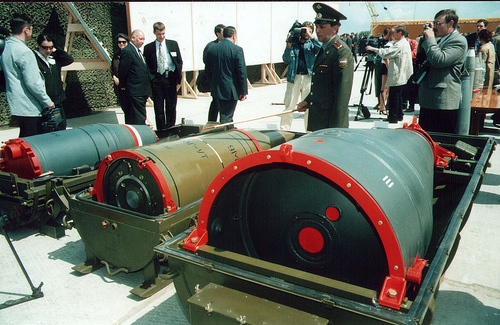 December 08, 2012 “The Independent” — The bigger the lie the more people will believe it. We all know who said that – but it still works. Bashar al-Assad has chemical weapons. He may use them against his own Syrian people. If he does, the West will respond. We heard all this stuff last year – and Assad’s regime repeatedly said that if – if – it had chemical weapons, it would never use them against Syrians.

But now Washington is playing the same gas-chanty all over again. Bashar has chemical weapons. He may use them against his own people. And if he does…

Well if he does, Obama and Madame Clinton and Nato will be very, very angry. But over the past week, all the usual pseudo-experts who couldn’t find Syria on a map have been warning us again of the mustard gas, chemical agents, biological agents that Syria might possess – and might use. And the sources? The same fantasy specialists who didn’t warn us about 9/11 but insisted that Saddam had weapons of mass destruction in 2003: “unnamed military intelligence sources”. Henceforth to be acronymed as UMIS.

And now, the coup de théâtre. Someone from the Canadian Broadcasting Corporation called me up this week to talk about the use of chemical weapons by Hafez al-Assad in Hama during the Sunni Muslim uprising in the city in 1982. Their sources were the same old UMIS. But I happened to have got into Hama in February 1982 – which is why the Canadian was calling me – and while Hafez’s Syrian army was very definitely slaughtering its own people (who were, by the way, slaughtering regime officials and their families), no one ever used chemical weapons.

Not a single soldier I saw in Hama carried a gas mask. No civilians carried gas masks. The dangerously perfumed air which I and my colleagues smelt after chemicals were used by our (then) ally Saddam against Iranian soldiers in the 1980s was not present. And none of the dozens of civilian survivors I have interviewed in the 30 years since 1982 ever mentioned the use of gas.

Yes, the bigger the lie, the better. Certainly we journos have done our duty in disseminating this bunkum. And Bashar – whose forces have committed quite enough iniquities – is about to be accused of another crime which he has not yet committed and which his father never did commit. Yup, chemical weapons are bad news, folks. That’s why the US supplied Saddam with the components for them, along with Germany (of course).

That’s why, when Saddam first used gas on Halabja, the UMIS told CIA officers to blame Iran. And yes, Bashar probably does have some chemicals in rusting bins somewhere in Syria. Madame Clinton has been worrying that they may “fall into the wrong hands” – as if they are presently “in the right hands”. But the Russians have told Bashar not to use them. Would he piss off his only superpower ally?

And by the way, which was the first army to use gas in the Middle East? Saddam? Nope. The Brits, of course, under General Allenby, against the Turks in Sinai in 1917. And that’s the truth.