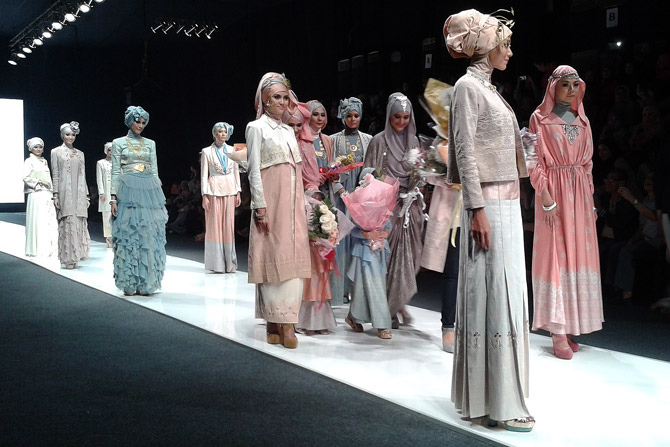 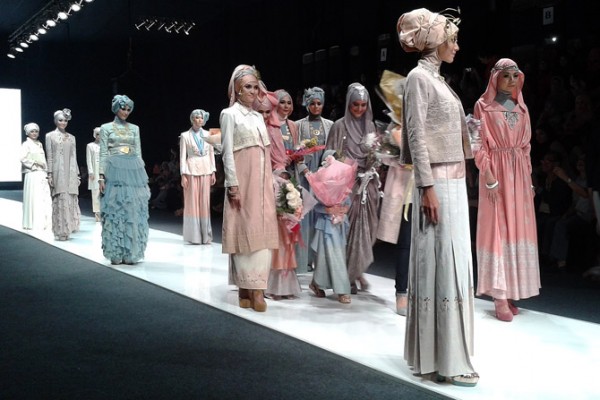 The hundreds of hijab fashionistas attending day six of Jakarta Fashion Week (JFW) proved once again that Muslim women don’t sacrifice creativity in their pursuit of modesty – and showed why Indonesia is aiming to become the trendsetter of the Muslim fashion world.

JFW 2013, staged this year at Plaza Senayan in Jakarta from November 3th – 12th, devoted one day to the Muslim fashion scene, showcasing designers on the cutting edge of Indonesia’s effort to become the capital of the Muslim fashion world by 2020.

With a growing market in countries such as Malaysia and the UAE, many Indonesian Muslimwear designers are highly regarded for their innovative approaches. Indonesian designers are regularly invited to Islamic fashion shows in Middle Eastern countries.

Fashion specialists say this creativity comes about because Islamic garb is seen as a choice and not a compulsion.

In Indonesia, “women who wear the hijab from day to day do it because of their own willingness to wear it,” Diaz Parzada, a creative director at Jakarta Fashion Week, told Khabar Southeast Asia. “There are no specific regulations requiring Muslim woman to wear the hijab. They use the hijab on their own, to live the teachings of their religion,” she said.

“That’s why I think Muslim dress is developing rapidly in Indonesia. Hijabers want to express themselves, be fashionable and observe religious precepts at the same time. Their creativity creates the variety of Muslim fashion in Indonesia.”

A “reference point” for Muslim fashion

Indonesia – with the world’s largest Muslim population, a variety of cultures and a wealth of creative resources – could become a fashion mecca well before 2020, the goal set by Indonesia’s Ministry of Commerce and Industry in 2010, some observers say.

“In my opinion, Indonesia clearly could be a major reference point for Muslim fashion. Although the government estimates by the year of 2020, I think the very rapid development of Muslim fashion could make it faster,” said Lovi Agustine, 29, a boutique owner who attended the show.

Anty Widya, a 28 year-old entrepreneur, added, “Muslim fashion has a variety of new trends. Before, Muslim fashion tended to be monotonous and less stylish. Then in one year, the progress we see in Muslim fashion here has been very encouraging.”

Next up was a series of designers from the Association of Indonesian Fashion Designers and Entrepreneurs (APPMI). Three young designers from the hijaber community – Ria Miranda, Noni Zakiah, and Restu Anggraini – rounded out the segment.

“Reaching the goal of Indonesia as a Muslim fashion trendsetter by 2020 depends on how much the government is willing to support the sector,” said Nurul Adiyanti, a 23-year-old model and second runner-up in Muslimah Beauty 2011.

“My contribution is to buy Indonesian products and to promote them through the social media. Hopefully Indonesian Muslim fashion will have a large audience and be known globally,” she added.

That growth will bring benefits to all Indonesians, regardless of their religion or fashion tastes. According to Aries Mufti, an economic expert from the Indonesian Sharia Council, the Muslim fashion sector already contributed $7.5 billion to the Indonesian economy in 2011.