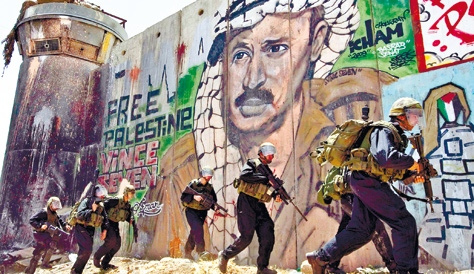 Two-state, one-state, “peace process,” “path to peace” – whatever words one chooses to use, the Israeli-Palestinian conflict is about one very simple thing: dispossession. It is about a population of newcomers taking the land, homes and possessions of the indigenous Palestinian people and expelling them. That is the essence of the conflict.

Despite countless United Nations resolutions, and in the face of the weight of international law, Israel and her allies – including Australia – continue to see the conflict quite differently. The starting point is not dispossession, but Israel’s so-called “right to exist.”

It is important to understand these two paradigms if we are to make any sense of the way forward. It also means we can put the Palestinian National Authority’s (PNA) bid to seek non-member observer state status for Palestine in the United Nations General Assembly into its proper context.

The two-state solution on the basis of Palestine’s pre-1967 borders is a compromise solution for Palestinians. And judging by the way it is lauded by Israel and Western leaders, it is the ideal solution – and a magnanimous one, at that. For Palestinians who accept such a state, however, it is a pragmatic solution that says: we accept that we have lost. Despite Israel having had no moral or legal legitimacy in expelling, depopulating and colonizing our majority population some sixty-four years ago, we will be pragmatic and compromise by accepting a return of a mere 22% of our historic homeland.

And yet even this modest compromise evades Palestinians, not, as Israel would have the world believe, because the Palestinians are incapable of negotiating and making peace, but because Israel is simply not interested in a two-state solution. Israel and her allies’ opposition to the PNA’s bid for non-member observer status is not because of any fear that this will lead to an independent Palestine state. Nobody honestly believes such a status represents anything more than a symbolic gesture of support.

Indeed, in an interview on ABC Radio National Breakfast yesterday, Peter Wertheim, Director of the Executive Council of Australian Jewry, said that an upgrade to observer state status would “harm the cause of peace by raising and then dashing expectations.” Presenter Fran Kelly then asked, “So it will harm the cause of peace because Palestinians in your view would get their hopes up that there is going to be a move towards recognition of a two state solution but that’s not going to happen?” Wertheim responded, “Precisely because nothing will actually change on the ground.” I couldn’t have put it better myself.

So, beyond the symbolism, what is all the fuss about? The fear lies in the fact that observer state status would potentially allow the PNA to take legal action in the International Criminal Court (ICC) against Israel and Israeli citizens for alleged war crimes, or for settlement building in the West Bank, including East Jerusalem. It is a fear so potent that Britain has made its support of the UN bid conditional on Mahmoud Abbas refraining from trying to join the ICC. While France is voting in favour of the PNA’s resolution, it has been pressuring the Palestinians to amend the resolution and make it clear that it will not take Israel to the ICC for any alleged war crimes committed retrospectively.

And this brings us to the heart of the issue. Israel and her allies know that a two-state solution is not on the horizon and that this resolution will have no impact on the ground. Their opposition is based on something more insidious. It is about continuing to allow a situation where Israel can enjoy immunity to legal accountability.

On 25 March 2001, then Israeli Prime Minister Ariel Sharon was quoted by BBC News as saying: “Israel may have the right to put others on trial, but certainly no one has the right to put the Jewish people and the State of Israel on trial.” It is precisely this culture of impunity that Israel and her allies, including Australia’s Liberal Party and Prime Minister Julia Gillard – who was only forced to “abstain” because of political pressure – seeks to protect.

The fact is that the two-state solution is dead. Israel knows it. The United States knows it. And it is an illusion to think that our own government doesn’t know it. While the Labour government should be commended for pressuring Julia Gillard to agree to Australia abstaining, rather than opposing, a vote on the Palestinian observer status resolution, abstention does not quite get Australia on the “right side of history.” It is as if, as Ghassan Hage has put it, “Palestinians can now say: ‘Not that long ago, the Australian government didn’t believe we were human beings. Today they admit that they’re not so sure’.”

So, while a shift from a “No” vote to an abstention is an improvement on the tired, old policy of blind support for Israel, it is still only a modest victory. I fear we are still far from a genuine commitment to a viable two-state solution. For even a “Yes” vote, in the absence of real pressure applied on Israel to respect international law and make viable what it renders unviable with each passing day, is little more than a symbolic gesture.

The facts on the ground in the occupied territories and Jerusalem make a mockery of the call for a state based on the 1967 borders. The more the sloganeering about the “peace process” and “negotiations” (which the Palestine Papers clearly showed were a charade), the more attention is diverted from the expanding settlements, the seven-hundred kilometer long annexation wall, the Judaisation of Jerusalem, the land grabs and confinement of Palestinians into tightly controlled cities, the monopoly and control Israel exercises over the West Bank’s natural resources – including, most importantly, water – the complete dependency of the Palestinian economy on Israel, the blockade on Gaza, and so on.

While many Palestinians support the PNA’s UN resolution because of its symbolic weight and the potential to seek justice in the ICC, we cannot lose sight of the bigger and more important questions:

These are the questions that need to be asked. But these questions can only be asked if the starting point is an understanding that this conflict is and always has been about dispossession. That’s what it was about over sixty-four years ago. And that’s what it’s still about today.

Randa Abdel-Fattah is the award-winning author of eight novels. She practiced as a lawyer for ten years, and is now completing a PhD in the Department of Sociology at Macquarie University. You can watch her in conversation on ABC News 24 on the Gaza crisis.