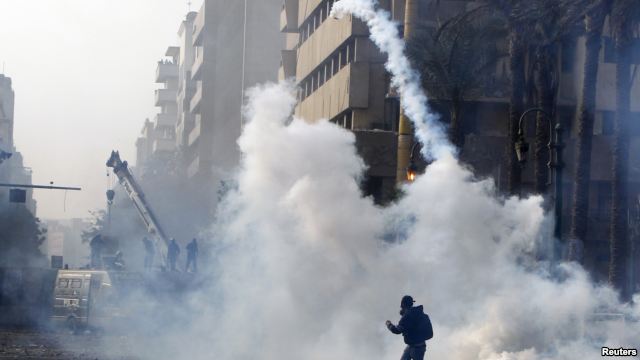 CAIRO — Egyptian President Mohamed Morsi is due to meet with the country’s Supreme Judicial Council, as judges try to persuade the president to limit the sweeping powers he granted himself last week.

The decree has sparked protests by opposition activists, who continued to camp out in Cairo’s Tahrir Square for a fourth day Monday demanding Morsi reverse his decision.

The president is defending a decree placing his decisions above judicial review, stressing in a statement that the move is temporary.

The argument has done little to quell the unrest, expected to peak again Tuesday because of what his opponents see as a power grab. Opponents and supporters of the president have called for rival mass rallies in the city on Tuesday.

“The precedent that he is making, that he is unquestionable, even for a few months, is really annoying and worrying and is really not the thing you expected from an elected president,” said political activist Wael Khalil.

Morsi argues he needs to sweep the judiciary of the old guard to ensure a new constitution and parliament.

But the desire for checks and balances against absolute power — a driving force in last year’s revolution — remains.

Morsi’s opponents hope the power of the street will act as a check on what some are calling his attempt to become “a new pharaoh.”

“I think it is a bit of an exaggeration, not because I know his intentions  –  I really don’t care about his intentions  – but I think he cannot really become a new pharaoh and what we’ve witnessed over the past few days really testifies to that,” said activist Khalil.

The rallies have reinvigorated a fractured opposition.

Political analyst Mustafa el-Labbad said that Tuesday’s protest was called by everyone from leftists to nationalists.

“All non-Islamic forces will be there and I think this result is not so bright for Mr. Morsi,” he said.

Ramifications are being felt economically, with Egypt’s stock market plunging despite a new preliminary deal with the International Monetary Fund, and international kudos for Egypt’s role in brokering a cease-fire in Gaza last week.

“They are misinterpreting that as a green light for them as Western recognition so they can do what they want internally in Egypt,” El-Labbad said. “I think it is a fatal mistake.”

Failing to stop the nation’s economic decline is worrying.

“I think that contributed to the anger against him – that he didn’t attempt to do that,” political activist Khalil said. “Had he, for instance, tried to do something for the people, to introduce improvement in livelihoods and the judges stopped it, then he would have had a case.”

In Washington, U.S. Senator John McCain criticized Morsi’s decree as “unacceptable,” in an interview with the television network Fox News.

The Obama administration has proposed a $1 billion debt relief package for Egypt to help revive its struggling economy. Egypt also has received billions of dollars in U.S. military aid over three decades of close relations.

The U.S. State Department said the Morsi declarations “raise concerns for many Egyptians and for the international community.” It said one of the aspirations of the 2011 revolution was “to ensure that power would not be overly concentrated in the hands of any one person or institution.”

VOA’s Mark Snowiss contributed to this report from Washington