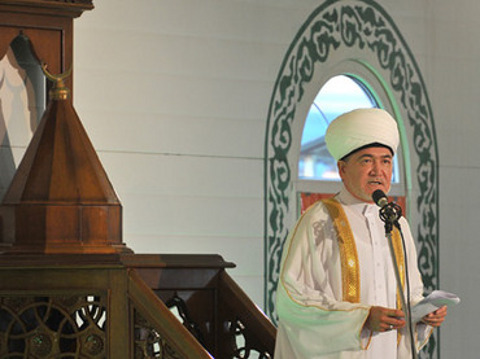 The Grand Mufti of Russia Ravil Gainutdin has categorically denied allegations that the country is “the number one enemy” of Islam and Muslims.

The allegation was made by Sheikh Yusuf Al-Qaradawi – one of the most influential clerics in Sunni Islam.

“While religious freedom is curtailed in Europe, Russia, on the contrary makes constructive steps to protect believers’ rights and feelings,” the head of Russia’s Mufti Council stressed speaking at the Eurasian Islamic Council in Istanbul.

The Russian leadership has repeatedly underlined that millions of Russian Muslims are part of the Islamic world, Gainutdin pointed out, as cited by Interfax. The large-scale “renaissance of Islam” in Russia in the past two decades has become a “visual implementation of these words,” he added.

Muslim organizations get a wife range of state support for such things as Islamic education or the financing of projects by Muslim communities, Gainutdin noted.

“Dozens of mosques, madrasahs, Muslim cultural centers and universities are built and opened in Russia every year,” he observed. “I’m confident the statement regarding [Russia’s] hostility towards Islam doesn’t reflect reality.”

The Mufti admitted though that there are serious problems, but that it is an inevitable part of the formation of democratic institutions in the country that had been living “under totalitarian pressure” for 70 years.

Russia is home for over 20 million Muslims, and Islam is the second largest religion in the country after Orthodox Christianity. However, the anti-Muslim sentiment has been on the rise in recent years, triggered by a huge inflow of migrant workers from Central Asia. Bringing their traditions to Russia, guest workers are seen as aliens by many locals.

In September, Moscow authorities cancelled a project to build a Muslim cultural center and a mosque in the capital’s suburbs after 2,000 people gathered to protest the plan.

Moscow’s Muslim community is estimated at about two million people, while the number of mosques is not enough to accommodate all believers. As a result of that, during big Muslim festivals, they pray in the streets of the capital, causing traffic problems and annoying other citizens.

However, Mayor Sergey Sobyanin expressed doubts the city needs more mosques as many worshippers “are not Moscow residents.”

Earlier in October, several Muslim girls in a village in Russia’s Stavropol Region were banned from wearing hijabs while attending classes. Their parents filed complaints to the district prosecutor’s office saying that the school had violated their constitutional rights to education and freedom of religion.

The incident drew wide public attention and a discussion on whether school uniforms should be introduced in Russia – same as it was in the Soviet Union.

Commenting on the controversy, President Vladimir Putin stressed that religious feelings must be respected, but Russia is a secular state.