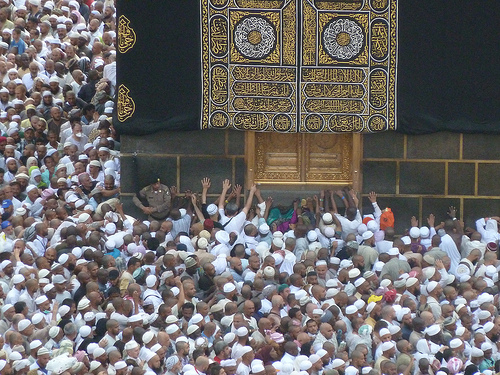 There is no place on Earth as venerated, as central or as holy to as many people as Makkah. By any objective standard, this valley in the Hijaz region of Arabia is the most celebrated place on Earth.

Thousands circle the sacred Kaaba at the centre of the Haram sanctuary 24 hours a day. Millions of homes are adorned with pictures of it and over a billion face it five times a day.

The Kaaba is the epicenter of Mecca.

The cube shaped building is at the heart of the most well-known real estate in the history of mankind; it is shrouded in black and its fair share of mystery.

Here are just a few things that most people may not know about the Kaaba:

10. It has been reconstructed several times

From time to time, it has needed rebuilding after natural and man-made disasters.

Of course, we all know of the major reconstruction that took place during the life of the Prophet

before he became a Prophet

. This is the occasion when the Prophet

averted major bloodshed by his quick thinking on how to place the Black Stone using a cloth that every tribe could lift up.

Since then, there has been an average of one major reconstruction every few centuries. The last renovation took place in 1996 and was extremely thorough, leading to the replacement of many of the stones and re-strengthening the foundations and a new roof. This is likely to be the last reconstruction for many centuries (inshā’Allāh) as modern techniques mean that the building is more secure and stable than ever before.

The original Kaaba used to have a door for entrance and another for exit. For a considerable period of time it also had a window situated to one side. The current Kaaba only has one door and no window.

8. It used to be multi-coloured

We are so used to the Kaaba being covered in the trademark black Kiswah with gold banding that we can’t imagine it being any other colour. However, this tradition seems to have started at the time of the Abbasids (whose household colour was black) and before this the Kaaba was covered in multiple colours including green, red and even white.

7. The keys are in the hands of one family

At the time of the Prophet

, each aspect to do with the rites of Hajj was in the hands of different sub-groups of the Quraish. Every one of these would eventually lose control of their guardianship of a particular rite except one. On the conquest of Makkah, the Prophet

was given the keys to the Kaaba and instead of keeping it in his own possession; he returned them back to the Osman ibn Talha ® of the Bani Shaiba family. They had been the traditional key keepers of the Kaaba for centuries; and the Prophet

“Take it, O Bani Talha, eternally up to the Day of Resurrection, and it will not be taken from you unless by an unjust, oppressive tyrant.”

Whether Caliph, Sultan or King – the most powerful men in the world have all had to bow to the words of the Prophet

and ask permission from this small Makkan family before they can enter the Kaaba.

6. It used to be open to everyone

Until recently, the Kaaba was opened twice a week for anyone to enter and pray. However, due to the…