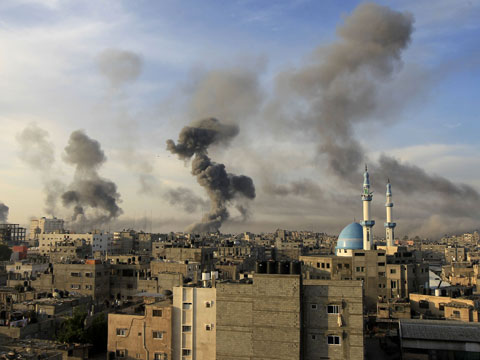 Israel and Hamas agree to truce after eight days of attacks in which 162 Palestinians and five Israelis are killed.

A ceasefire has gone into effect in and around the Gaza Strip, after Israel and Hamas agreed to cease hostilities.

The Egyptian foreign minister announced the a ceasefire agreement hours before it took hold at 19:00 GMT on Wednesday.

Mohamed Kamel Amr thanked all parties involved in brokering the truce as he made the announcement in a joint news conference with US Secretary of State Hillary Clinton in the Egyptian capital, Cairo.

Under the ceasefire terms, Israel was to stop all aggression against the Gaza Strip from land, sea and air, including cross-border incursions and targeted killings.

Palestinian factions were to cease all aggression from Gaza towards Israel, including rocket fire and attacks on the border.

Twenty-four hours after the ceasefire takes effect, Israel will also be committed to opening of all border crossings and ease restrictions on movements of people and goods in and out of the enclave.

Al Jazeera’s Nadim Baba, in Gaza City, said people there were “very wary” of the ceasefire.

“People have been saying ‘congratulations on the ceasefire’ to each other but what they really want to know is what the details will be,” he said.

Hamas urged people to stay indoors but in Gaza City, some people took to the streets celebrating the ceasefire, blasting car horns and setting off fireworks from rooftops amid celebratory gunfire.

Israeli Prime Minister Binyamin Netanyahu thanked the US and Egypt for helping to broker the deal.

“The state of Israel has to try to achieve a ceasefire which will be continuous,” he said in a news conference as the ceasefire went into effect.

In Washington, President Barack Obama thanked Egyptian President Mohamed Morsi “for his efforts to achieve a sustainable ceasefire and for his personal leadership in negotiating a ceasefire proposal,” the White House said in a statement.

Before the announcement in Egypt, Israeli attacks on the Gaza Strip continued for an eighth day.

Twenty people were killed in Gaza on Wednesday, according to medical officials, bringing the death toll to a total of 162 since Israel’s military operation was launched. Seven children were among those killed.

“It’s been a very difficult day for the people of Gaza,” Al Jazeera’s Nicole Johnston, in Gaza City, said.

She said there had been “very heavy bombardment” from naval vessels in addition to aerial attacks.

Israel said it struck more than 100 targets, including a cluster of Hamas government buildings.

Clinton and UN chief Ban Ki-moon, who both met Morsi on Wednesday, have been shuttling between Egypt, Israel and the occupied West Bank in a bid to bolster a proposed ceasefire agreement that Cairo brokered between Israel and the Hamas movement that controls the Gaza Strip.

In Wednesday’s press conference with Amr, Clinton said: “The United States welcomes the agreement today for a ceasefire. In the days ahead, the United States will work with partners in the region to consolidate this progress.”

The announcement came after 24 people were wounded in an explosion on a bus in the Israeli city of Tel Aviv that Israel and the US described as a “terror attack”.

Five Israelis have been killed by rockets fired from Gaza since November 14. Israel says it launched its offensive on Gaza to prevent fighters from firing missiles into its territory.

Palestinians fighters fired more than 30 rockets at Israel on Wednesday, causing no casualties, and the anti-missile system, the so-called Iron Dome, shot down 14 of them, police said.

Nearly 1,400 rockets have been fired into Israel since the military offensive began, according to the Israeli military. Israel has carried out more than 1,500 strikes on Gaza during the same time period.

In a statement after the ceasefire took effect, the Israeli military said its forces had “destroyed significant elements of Hamas’ strategic capabilities”, including hundreds of rocket launchers and dozens of smuggling tunnels.

But Hamas chief Khaled Meshaal said Israel had “failed in all its goals” and had been “compelled to submit to the conditions of the resistance”.

He also thanked mediator Egypt, as well as Iran, which he said “had a role in arming” Hamas during the conflict.