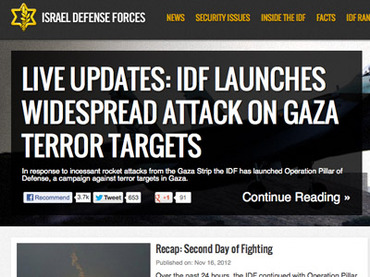 The IDF (Israeli Defense Force) assault on Gaza – the biggest in more than three years – has been accompanied by an equally aggressive social media offensive with sites like twitter used to publicize and justify the attack on Gaza.

After taking out Hamas military leader Ahmed Jabari with a precision guided bomb, the IDF tweeted a chilling warning to Hamas: “We recommend that no Hamas operatives, whether low level or senior leaders, show their faces above ground in the days ahead.”

Even before Israel’s attack on Gaza, the IDF began live blogging the rocket attacks from Gaza on southern Israel.

The news about the Jabari assassination went to the ‘twittersphere’ even before it was announced to the media during a military briefing, which can be arguably called the first declaration of war on a micro-blog.

­IDF’s Facebook page is full of graphics explaining the threat that rockets fired from Gaza pose to Israeli civilians and calling to share them in sign of support for Israel’s right to retaliate. There are also videos of air strikes on Hamas operatives, including the one that killed Jabari.

“Israel’s use of social media to justify its actions is three dimensional and has three different audiences,”

Primarily it’s a warning to Hamas militants in Gaza, but it also appeals to Israeli public opinion as a show of spirited resistance and appeals to international public opinion that the killing was a targeted attack on a terrorist with minimum civilian casualties.

But there is a more sinister side to Israel’s killing of Jabari. For several years he has been Israelis partner in Gaza. After the 2009 Israeli “Cast Lead” assault on Gaza, Israel made a deal with Hamas. As long as Jabari kept the rockets from raining down on Israel, Israel would keep the cash and aid trucks rolling in.

However, in the last few weeks, the rockets started flying again and Jerusalem blamed Jabari. As Defense Minister Ehud Barak put it, “in the Middle East there is no second chance for the weak”.

Opponents from the Qassam Brigades are also there, fighting for international sympathy through the social media and trading threats with the IDF.

“Our blessed hands will reach your leaders and soldiers wherever they are (You Opened Hell Gates on Yourselves),”

they tweeted in response to the killing of their commander.

Interestingly, the owners of the platform, which usually clamp down hate speech and threats of violence from their users, chose not to silence either side, leaving them free to wake their online war of hash tags and twit-pics.

Twitter has stayed silent on the ethically ambiguous situation. YouTube owner Google said they had a tough discussion among top executives on whether or not to block the IDF video of the Jabari killing, but eventually left it alone. “The problem is, if we don’t host it, somebody else will. How do we get all of it down?” explained Google Chairman Eric Schmidt.

Such “weaponization” of social networks is far from being new. In Afghanistan, both the Taliban and the NATO led coalition forces fight a war of words on Twitter simultaneously with the war of drones and roadside bombs. But the Gaza crisis shows how much technology changed the nature of information warfare stark naked to any ‘netizen’ with enough curiosity to take a look.