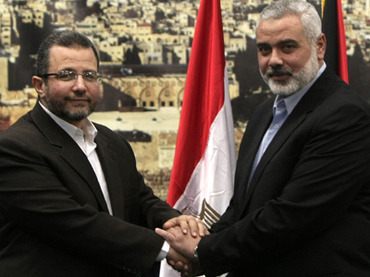 Hesham Kandil spoke in Gaza Friday after a brief cease-fire that Israel put in place during his visit to the area collapsed. The two sides have exchanged hundreds of aerial bombardments, leaving three Israelis and at least 20 Palestinians dead.

“The Egyptian revolution will make every effort and make sacrifices to stop this aggression and to achieve a truce and ensure that it continues, to achieve the equitable peace and to establish a Palestinian state with Jerusalem as its capital,” he said. “This is the only way that we will achieve stability in the region.”

Israel says it honored a pledge to suspend its military offensive while Egypt’s prime minister visited but said that Hamas militants fired at least 50 rockets into Israel during that time.

Israeli Defense Forces (IDF) said that since Wednesday they had targeted 450 of what they called terrorist sites in Gaza while over 330 rockets from Gaza had landed in Israel.

The IDF said its Iron Dome missile interception system had destroyed more than 130 rockets headed toward Israel. It said it was taking early delivery of a fifth Iron Dome battery in order to bolster its defenses.

The Israeli military also deployed tanks along the border with Gaza and activated 30,000 mostly infantry reservists. Analysts say the moves could be in preparation for a ground incursion into Gaza if the conflict continued.

“We are prepared, if needed, to broaden the operation in a significant way,” he said.

Palestinian militants announced they fired two missiles at Tel Aviv, Israel’s largest city, for the second day in a row. Israeli officials said there were no casualties and no damage.

Tel Aviv, lying some 70 kilometers from Gaza, had been considered out of range of Gazan missiles until this week.

Tel Aviv Official Eytan Schwartz said that the city had not been targeted since Scud missiles landed during the Gulf War 21 years ago.

“Tel Aviv is very much prepared as are, I assume, all the other local authorities in Israel,” Schwartz said. “There is a clear division of the responsibility of the state and the central government, of the army, the military and other security forces, and of the local authorities.”

Israeli government spokesman Mark Regev said the missiles fired near the capital show why Israel has no choice but to use its military to retaliate.

Targeting Tel Aviv, he said, “only underscores the danger that the Israeli public faces in this formidable military machine in Gaza and what the Israeli government is doing today, what the action that we are taking is designed to do, is to remove that threat, to free the Israeli people from this constant threat of rocket launches from the Gaza Strip.”

Outside Gaza, thousands of Palestinians rallied across the West Bank following Friday prayers chanting anti-Israel slogans and calling on Hamas to bomb Tel Aviv. Protesters also gathered at the entrance to East Jerusalem’s Old City but were dispersed by a large police contingent there.

Israel began its military offensive Wednesday using a missile strike to kill the top military commander of Hamas in Gaza.  Israel dropped leaflets warning Gazans to stay away from buildings and locations run by the military wing of Hamas.

Hamas vowed revenge and warned that Israel had opened up what it calls “the gates of hell.”

Meanwhile, the Palestinian Authority has repeated its call for the U.N. Security Council to take action to end Israeli air raids on Gaza.

A day after the Security Council held an inconclusive emergency meeting on the escalating violence, the Palestinian U.N. observer, Riyad Mansour called on the group to protect Palestinian civilians from the “brutal” attacks that are “bringing life to a standstill” in Gaza.

The head of the secret service in Gaza, Tawfeek Tirawi, has accused Israel of war crimes.

VOA’s Jeff Seldin contributed to this report from Washington.