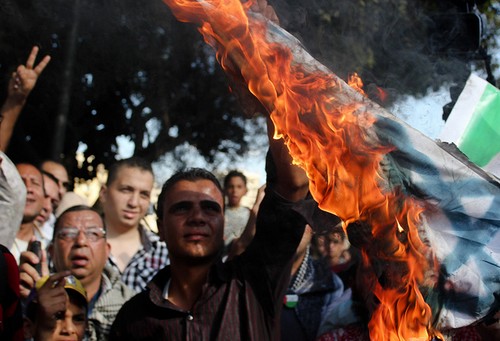 Israel has dealt a harsh blow to the resistance in Palestine. Its assassination of the prominent Hamas military commander Ahmad al-Jaabari was a vengeful move, which will affect Hamas in several ways.

The immediate impact is on the running of the movement’s military apparatus. In the short term, it is on the command of that apparatus, given that its top commander, Mohammad al-Daif, was heavily reliant on his aide Jaabari. The long term impact relates to Jaabari’s official position in the Hamas leadership, the choice of his successor, and the considerations and outlook which govern that choice.

Regardless of how the Palestinian resistance responds on the ground, or whether Israel’s claim to have destroyed its strategic missile infrastructure in the Gaza Strip is true, the answers needed today are less about Palestine than Egypt.

No amount of evasion can prevent a succession of questions from being asked about the real strategy of the worldwide organization of the Muslim Brotherhood (MB), and of its Egyptian and Palestinian branches, which control the Egyptian state and the Gaza Strip respectively.

Israel’s government – as well as its security and military establishments – has ample reason for wanting to unleash all kinds of aggression on Gaza. But Israel’s audacity in deciding to go after such a heavyweight target as Jaabari remains puzzling.

On the ground, Israel was relying on its intelligence and operational prowess to counter the Palestinian resistance’s improved capabilities. Its announcement that it destroyed some 20 key missile sites presents a challenge in this regard, after Israel tried the same thing in Lebanon in 2006, but fell into a trap that made its “operation” to establish decisive deterrence come to nothing, even after the “operation” turned into “war.”

The fact that Israel can reach Jaabari and other military commanders shows it has a massive advantage on the intelligence front. This made it easier for the political leadership to execute this blow, and also led it to the conclusion that it would not – at least for now – risk seeing the confrontation escalate into a broader war. Yet there is no guarantee against that since other battlefield-related factors were involved in the decision to embark on this adventure.

This leads to the more important question: Was Israel’s assessment based on accurate information reassuring that neither Egypt nor the MB leadership are prepared to take any radical action toward creating new realities in Palestine and the region?

The MB needs to be asked some fundamental questions here. Leaks from internal discussions by the worldwide MB leadership, described as the most important ever held, indicated a decision was made to give absolute priority at present to consolidating Islamist rule in some countries and acquiring power in others, and to avoid antagonizing foreign powers in the process. It has been widely said that the MB want a full term in power, meaning between four and six years, in which no other issue would be allowed to preoccupy them. The most viable way of ensuring that with regard to Palestine is through a long-term truce between Hamas and Israel.

The first Brotherhood-ruled Arab country, the MB as an organization, and the bereaved Hamas, are facing their toughest test. It will not be the last, but it is the toughest. Will the upshot of the Arab Spring be that Palestine is forgotten and Israel is left to ravage it undeterred? Or will the Arab Street in general, and the Palestinians in particular, sense that a positive change has occurred?

Lest anyone think this is about withdrawing ambassadors or issuing strongly worded statements of condemnation, or even about summoning the Arab League or UN Security Council into session – such steps are meaningless. Hosni Mubarak would have done the same thing if he had been confronted with a big demonstration in Tahrir Square.

The question for this group today is, simply: Are you in the heart of the struggle with Israel or not? While many Egyptians can say where they stand, the regime is facing a moral dilemma that could result in it being weakened more than many might expect.

But the real challenge is for the Hamas leadership. If it opts to go along with the line of the worldwide MB, it will court an explosion within its own ranks. This is a serious prospect. It has been raised in internal discussions which showed that differences between Hamas’ various factions are not superficial, with the military wing – and Jaabari in particular – opposed to any truce with the enemy.

This compounds the danger. The resistance in Palestine could face a major crisis. It knows, however, in line with its people’s instincts, that when the baton-carrier’s grip loosens, others pick it up and race forward.

Ibrahim al-Amin is editor-in-chief of Al-Akhbar.

This article is an edited translation from the Arabic Edition