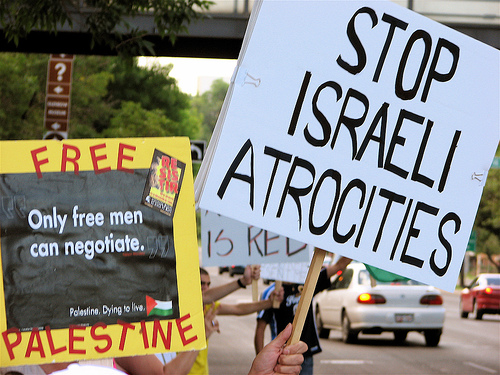 Richard Falk is the present United Nations Special Rapporteur for the Palestinian Territories. His job is to monitor the human rights situation in the territories, with particular reference to international law, and report back to both the U.N. General Assembly and the United Nations Human Rights Council. He is professor emeritus of international law at Princeton University and well qualified for his United Nations post.

Professor Falk was appointed in 2008 to a six year term in his present position. That means he has been telling the unsettling truth about Israeli behavior for four years now, with another two to go. Repeatedly he has documented Israeli violations of international law and its relentless disregard for Palestinian human rights. For instance:

– In his 2008 report Falk documented the “desperate plight of civilians in Gaza.”

– In his 2009 report Falk described Israel’s assault on the Gaza Strip as a “war crime of the greatest magnitude.”

– In his 2010 report Falk documented Israel’s array of apartheid policies.

– In his 2011 report Falk documented Israeli policies in Jerusalem and labelled them “ethnic cleansing.”

– And finally, in this latest report for the year 2012, Falk has concentrated on two subjects:

First, Israel’s treatment of Palestinian prisoners which, he concludes, is so bad as to warrant investigation by the International Court of Justice (ICJ). It should be noted that Israel does not recognize the jurisdiction of the ICJ. However, condemnation by this organization would, within the context of growing awareness of Zionist crimes, help further educate public opinion.

Second, Falk documents the assistance given Israel’s expansion of colonies on the Palestinian West Bank by a number of multinational corporations, including Motorola, Hewlett-Packard and Caterpillar Inc. This assistance may be profitable, but it is also manifestly illegal. The CEOs and board members of these companies stand in violation of international laws including provisions of the Geneva Conventions.  Since no nation, nor the UN itself, seems ready to prosecute them, Professor Falk has recommended a boycott of the guilty firms “in an effort to take infractions of international law seriously.”

In a sane world this work would make Richard Falk a universally acclaimed defender of justice. But ours is not a sane world.  And so you get the following sort of responses from both Israel and its supporters:

Karaen Peretz, the spokeswomen for the Israeli Mission at the United Nations, found Professor Falk’s latest report “grossly biased.” This is a sort of response used by someone who cannot dispute the evidence and so must resort to attacking the character of the one presenting the evidence. Peretz also asserted that “Israel is deeply committed to advancing human rights and firmly believes that this cause will be better served without Falk and his distasteful sideshow. While he spends pages attacking Israel, Falk fails to mention even once the horrific human rights violations and ongoing terrorist attacks by Hamas.”

Actually, this is not true. Back in 2008 Falk requested that his mandate from the UN Human Rights Council be extended to cover infringements of human rights by Palestinian governments just so he would not seen as partisan. Subsequently, Mahmoud Abbas’s pseudo Palestinian Authority called for Falk’s resignation. In this job, you just can’t win.

In any case, Falk’s documenting of Israel’s crimes puts the lie to Peretz’s claim that Israel is “deeply committed to advancing human rights” and that documentation cannot be dismissed as a “sideshow.” Relative to sixty four years of ethnic cleansing, it is the militarily insignificant missiles out of Gaza that are the “sideshow.” And, can we honestly assume that Ms Peretz’s attitude toward Professor Falk would turn for the better if in this report he had mentioned Hamas “even once”?

Then there is United States Ambassador to the United Nations Susan Rice. She echoed Peretz by describing Falk as being “highly biased,” Well, what sort of attitude is one suppose to have toward overwhelming evidence persisting over many years? Isn’t one supposed to be “biased” in favor of such evidence? To ignore it doesn’t make you balanced or fair. It makes you either corrupt or in a deep state of denial.

Ms Rice goes on to say that “Mr. Falk’s recommendations do nothing to further a peaceful settlement…and indeed poison the environment for peace.” These are pretty strong words, but if considered critically they make little sense. First of all, Falk’s mandate requires him to reveal the facts about human rights violations in the Palestinian territories. It makes no reference to “furthering a peaceful settlement.” That is what the U.S. government claims to be doing. And its record in this regard is pitiful. Second, just why should conclusively documenting practices that may well be standing in the way of a settlement, be equated with “poisoning the environment for peace”? That doesn’t add up at all.

There are many other spokespeople who have reacted negatively to Falk’s latest report ranging from the Canada’s Foreign Affairs Minister to representatives of the companies caught on the wrong side of the law. And, remarkably, they all sing the same song:  Falk is bias, ad nauseum. They can do no better because they cannot refute the professor”s evidence. Thus, all of these well positioned, well paid representatives of nations and multinational businesses are reduced to sounding like lawyers defending the mafia.

Professor Falk’s experience should serve as a warning to both those who would, on the one hand, make a career out of being a spokesperson for governments or companies, and on the other, those who would dedicate themselves to “speaking truth to power.” Taking on the role of the former is the equivalent of selling your soul to leadership whose sense of right and wrong goes no further than their own local interests. Taking on the role of the latter is to face seemingly endless frustration for, as Noam Chomsky once noted, power already knows the truth and doesn’t care one jot for it.

Yet, for those who would travel down this latter road, Richard Falk is as good a role model as can be found. Having dedicated himself to the role of truth teller he is to be commended for his devotion to justice and sheer durability. He is a hero who, hopefully, will have his praises sung long after Ms Peretz and Ms Rice are deservedly forgotten.