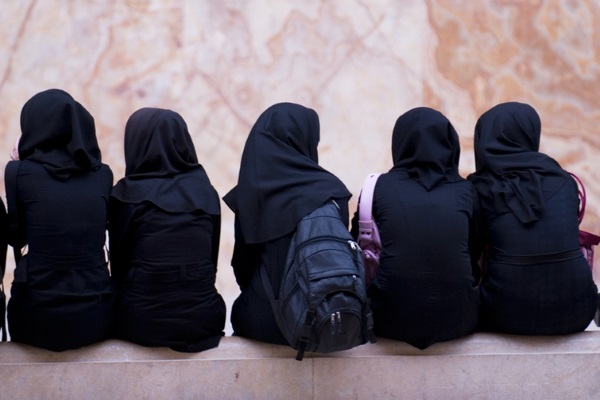 Muslim women and their rights to education is one of the most hotly debated topics when it comes to the religion; from both sides, from within, and almost always from those who are less informed.

Sometimes I become quite cut off from the realities of these debates, because I was raised in several communities (both Muslim and non-Muslim) that did not discriminate between boys and girls when it came to education.

Even now, I live in a Muslim-majority country where Muslim girls are encouraged to work towards tertiary education as much as Muslim boys.

In fact, girls outnumber boys at tertiary level and many women hold high positions in public and private offices. The plight for education is also highly competitive and in our pluralistic, multi-cultural, multi-faith country, all children, girls and boys (regardless of their religion or race), are encouraged to study hard in school and do well at university level in order to be successful.

I don’t think there is much discrimination between boys and girls from the society as a whole and even if there is, it would be based on individual families’ preferences and opinions about whether their daughters are as deserving as their sons when it comes to being provided the opportunities for education.

So when I come across the odd article or comment that blatantly talks about Muslim girls being oppressed, left unlearned and forced to be slaves in the kitchen, I often find that it is written by someone who dislikes Islam enough to associate such beliefs or practices with the religion. And I normally have to take a step back in order to understand where the writer is coming from. Is it really true that this person has studied Islam enough to unravel such strong viewpoints, or is this based on observation of a certain culture, community or country that he or she has immediately associated with the religion, without it being substantiated by Islam in any way?

Islam has sanctioned the right for education for all Muslim women. If some Muslims don’t believe in allowing their daughters to go to school, to learn to read, to participate in debates, to pursue their Master degrees, to succeed in their respective careers, then it’s the beliefs and practices of such Muslims and not Islam. It can be confusing, but it is important to remember that Islam has honored women in ways that society can’t – and Islam is a comprehensive way of life, that is not necessarily followed by Muslims.

But at the Same Time, What is Education?

This is quite a complex article to write, because in Islam, education encompasses a whole lot more than just going to school, sitting for exams and moving on to University before jumpstarting a career. Becoming an educated Muslim, yes, does involve reading, writing and comprehension, but it also includes having good manners – and it is obligatory upon both parents to educate both sons and daughters in such a holistic manner. Prophet Muhammad (peace be upon him) relays that the best parents are those who provide the best of education, which includes the best of manners. (Al-Bukhari)

When we look at our educated world today, how many school-going children or university graduates demonstrate good manners when interacting with others? How many adults – who have paved their lucrative career paths – are able to engage in ethical transactions at all times to honor their clients, stakeholders and employees, for the sake of God?

Having a university degree, or two – or completing a dissertation in a very complex scientific field is a formal recognition to illustrate the extent to which a person has studied, but true education lies in good character, moral upbringing, experience (and the ability to learn from experience), emphatic interpersonal relations with others, and the strong desire to please the Lord, alongside the written certificate. And nowadays with the advent of information exchange via the internet, laced with free classes, education doesn’t even have to be written on paper to be recognized. Similarly, co-op oriented activities, apprenticeship and other forms of experience (like volunteering in a soup kitchen) are all shapes and sizes that emerge from different forms of education. There is just so much more to learning than getting that piece of qualification.

In no way am I advising anyone to skip school and frolic on the streets, but we need to take a step back and look at what the whole debate entails. Is school really doing a service to children if teenagers are leaving the institution after a few years worth of alcohol, drugs, and who knows, pre-marital relationships? Is it worth the fuss when a seventeen year old spends her late nights tending to a baby alone, while juggling the thought of exams? Or is it the drift-racing during the freshmen year of college and frat parties that are so important, and should not be missed?

All Muslim girls and women have the right of education – and Islam does place emphasis on garnering knowledge for both boys and girls – but pitting one side of the debate against the other is not going to quantify it, as there is so much more to education in Islam than just saying a girl who does not get into University is being oppressed.

Getting to Know the Women of the Past

A good way to understand what education is in Islam, and how educated women really were (and many still are), is to look at those who followed the Quran closely. Remember, Islam is perfected through the Quran and the Hadith of Prophet Muhammad. Many Muslims are still learning how to follow both; don’t get confused.

The first woman who embraced Islam was Khadijah bint Khuwalid, wife of Prophet Muhammad. She was a rich merchant and a lady of honor who had been widowed twice already. After Islam came to her, she embraced it whole-heartedly, even while being a successful business woman and mother. She renounced her worldly belongings and gave to the poor for the sake of God. Little is known of her during her life, except that she was an educated woman who was loyal to God and His Messenger, and continued to educate her own four daughters and keep them on the Straight Path. Because of this, amongst her many sacrifices, she and her youngest daughter, Fatimah, are recognized as two of the most perfect women in Islam – a recognition given by God alone. That’s really quite a certificate to receive.

The other women around the Messenger, most prominently, Prophet Muhammad’s later wives, were all recognized for one reason or the other. They weren’t just random women who were chosen by him to marry, rather the Prophet married them through God’s directive, and each one of them is part and parcel of true education in Islam.

His first wife, after Khadijah’s passing, was Sawda, and Sawda was known for her exemplary domesticated skills. She was also kind and patient, a very motherly person who helped her new husband raise his children. Such kindness and empathy are rarely seen in a self-centred, modern world that sometimes talks down upon women who wish to stay at home to honor their duties as wives and mothers. She was also selflessly happy to give up her time with the Prophet to allow him to spend more time with Aisha, who needed him more.

Aisha was known for her intellectual prowess and leadership qualities that she used to continue spreading the message of Islam through her numerous narrations of Hadith. Only someone who was nurtured and cared for would be able to compile such detailed documentation about the Prophet’s life.

Zaynab, daughter of Jahsh – who also came from the proud Quraysh clan – was known as the “Mother of the Poor” and devoted her time, energy and funds to helping those who were less fortunate. There was never a moment where Zaynab would sit back easily while there were children in need or families that were starving.

Safiyyah, daughter of Huyayy, chose to embrace Islam and marry the Prophet and in doing so, she mitigated the problems between the Muslim and Jewish community during the time. She committed her time in service to improve Muslim-Jewish relations during her time, and she did this by demonstrating the best of manners, through her devotion to God and her loyalty towards her husband.

Umm Salama was another wife who was known for her wisdom and intellect, and it was through her wise advise that the Prophet (peace be upon him) – leader of the time – was able to make better decisions and solve some difficult problems. She was an important confidante at times when her husband needed a consultant of integrity.

Hafsa daughter of Omar was also known for her integrity and strictness and was given the responsibility of protecting the Quran when it was transcribed into print after the Prophet’s demise.

During the time of the Prophet, institutionalized schools and universities didn’t exist, but the young girls and women of the time represented half of the community and worked together with their male counterparts for the betterment of society. Many of the wives were teachers in their own right, but their distinct personalities and unique qualities, celebrated the grand diversity of Muslim women who could all contribute to Islam in their own special ways. Other women of the companions fought in battle – like Nusaybah was known to have protected the Prophet when he was injured during the battle of Uhud, and there were always women in the marketplace, operating as auditors even and speaking up during the Prophet’s sermons.

The above illustration puts Muslim women in the light of honor and credibility, those who were readily available and willing to please God. You need a holistic education in order to this, and Islam sanctions this, calling all parents to have their daughters educated in a comprehensive and cohesive manner, not just their sons. Education isn’t just about going to school and graduating from University. What use is it if children go through the system and get a degree only to emerge as an unethical doctor or unscrupulous lawyer?

So when the hot debate of whether Muslim girls are entitled to an education, one will always wonder how the writer was influenced to shape such a viewpoint – obviously influences not based on Islam. Furthermore, one should also ask what true education entails. It’s not just about school, or exams or university courses – there is so much more to being an educated person than what “modern education” entails today.

And Islam encourages all of the above: for both boys and girls; our sons and daughters.