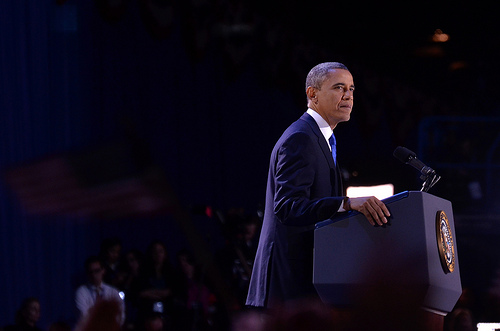 After clinching the victory, Obama told a crowd of thousands of supporters in Chicago he is more determined and more inspired than ever to tackle the country’s challenges.

“You voted for action, not politics as usual,” he said. “You elected us to focus on your jobs, not ours.  And, in the coming weeks and months, I am looking forward to reaching out and working with the leaders of both parties to meet the challenges we can only solve together.”

The president says he will work in his second term to reduce the U.S. government’s budget deficit, reform the tax code, reform the nation’s immigration system and reduce America’s dependence on foreign oil.

Obama congratulated his opponent on a hard-fought campaign and applauded Romney and his family for their tradition of public service.  He says he will reach out to Republicans to seek solutions to the country’s problems.

“In the weeks ahead I also look forward to sitting down with Governor Romney to talk about where we can work together to move this country forward,” said Obama.

“I have just called President Obama to congratulate him on his victory.  His supporters and his campaign also deserve congratulations,” said Romney. “I wish all of them well, but particularly the president, the first lady and their daughters.”

Romney says he and his running mate, Representative Paul Ryan, gave their all in the campaign and he thanked their supporters.

“I so wish that I had been able to fulfill your hopes to lead the country in a different direction.  But the nation chose another leader and so Ann and I join with you to earnestly pray for him and for this great nation,” Romney said. “Thank you and God bless America.  You guys are the best.  Thank you so much.”

Obama won almost all of the so-called “swing states” that he and Romney both needed for victory.

U.S. presidential elections are not decided by the popular vote, but by the Electoral College, in which each state’s influence on the outcome approximates its population.

Both candidates made a final push for votes Tuesday, almost until the polls closed.  Turnout was reported high in many parts of the country, with some voters standing in line for hours, despite a record amount of early voting.

Although the economy was the main issue of the campaign, Obama was the first president in many decades to be re-elected while the nation was suffering from high unemployment.

Meanwhile, Republicans retained control of the House of Representatives in Tuesday’s voting, but Democrats blocked the Republicans’ effort to take control of the Senate, where roughly one-third of the 100 seats were up for election.

Democrats will replace Republican senators in Massachusetts and Indiana, an independent will succeed a Republican in Maine, and in Connecticut, a Democrat will take the place of retiring independent Senator Joe Lieberman.

Japanese-born Democrat Mazie Hirono, who was elected in Hawaii, will be the first Buddhist U.S. Senator.

And, the Senate will have its first openly gay member, with the election of Democrat Tammy Baldwin in Wisconsin.