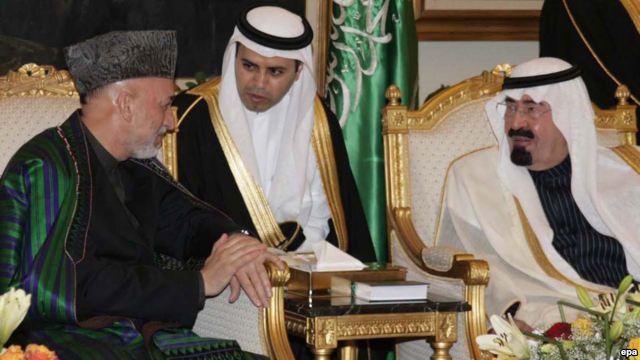 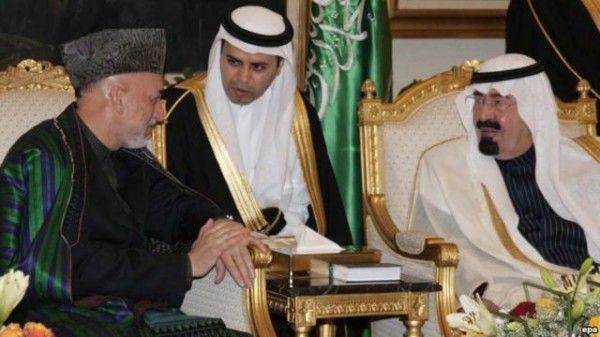 Saudi Arabia’s support for Afghanistan has been steady but inconspicuous over the years. But that is about to change.

The powerful Sunni-majority kingdom is embarking on a very public effort to carve out a bigger role in Afghanistan, pitting the oil-rich Gulf state directly against Shi’ite rival Iran in the race for influence as foreign forces leave.

That much became clear on October 29, when the Afghan government announced that Riyadh would build a multimillion-dollar Islamic complex in Kabul, marking its largest and most expensive foray into post-9/11 Afghanistan.

The project, which is expected to cost between $45 million and $100 million, was agreed between the two countries in Jeddah. Construction is expected to begin next year. The Islamic complex will cover 24 hectares on Maranjan Hill in central Kabul. It will feature a university, a hospital, a sports hall, and a mosque capable of holding around 15,000 worshippers at a time.

When completed, it will become a rival to the massive Iranian-built Khatam al-Nabyeen Islamic University in western Kabul. The Shi’ite religious school, which was opened in 2006, was built at a cost of some $17 million by one of Afghanistan’s most Iran-leaning clerics. The campus has a mosque, classrooms, and dormitories for its 1,000 Afghan students.

Late On The Scene

Thomas Ruttig, a former UN and European diplomat and director of the Afghanistan Analysts Network, an independent research organization in Kabul, sees the Saudi move as part of the intensified competition for influence as U.S. and NATO troops look to draw down by 2014.

Riyadh’s chief motivation is clearly to counter the significant sway of archrival Iran. But Ruttig says that Riyadh has its work cut out for it, considering its late arrival.

Iran, in contrast, has had a highly visible presence for the past decade.

Iran has built on its lingual and cultural links with Afghanistan by spending millions on infrastructure, including roads, power grids, and railway projects. Tehran also leaves its mark through its export of cultural and political views via its strong media presence and funding of religious schools.

Now the scene is set for an aggressive competition between Sunni-majority Saudi Arabia, which promotes the extremist Wahabbi sect of Islam, and Shi’ite-majority Iran. This raises the potential, Ruttig says, for sectarian tension in Afghanistan, whose population is estimated to be about 85 percent Sunni and 15 percent Shi’ite.

“There are very strained relations between Saudi Arabia and Iran. Both those countries will be competing for influence in Afghanistan, with the sectarian differences between both sides in the background,” Ruttig says. “So far, Sunni-Shi’ite relations in Afghanistan have been quite stable, but that can be undermined if both sides are much more aggressive than before in vying for influence in what they might perceive as a post-2014 [political] vacuum.”

The possibility of increased sectarian tension in Afghanistan would be cause for alarm in Central Asia and China, whose governments are wary of growing religious extremism.

It could be argued that Saudi Arabia was always a major player in the competition for influence in Afghanistan: Riyadh was a key financier of the Afghan resistance to the Soviet occupation in the 1980s; it helped fund and arm the Taliban in the 1990s; and it has in recent years sought to broker behind-the-scenes peace talks between the Taliban and the Afghan government.

But those efforts were always behind the scenes, and other than the provision of food and relief supplies and the occasional business venture, there were few obvious examples of Saudi involvement in Afghanistan.

Adel Darwish, a British journalist and political commentator who specializes in Middle Eastern politics, says Saudi Arabia is poised to make an important contribution. He says the Saudis can convince the Taliban leadership to enter peace negotiations and to encourage Pakistan to cut its ties with the militant group.

That leverage comes in part because of Riyadh’s close ties to regional powerhouse Pakistan, which has long supported the Afghan Taliban, and the kingdom’s role as a spiritual authority in the Muslim world as the guardian of Islam’s two holiest shrines. Riyadh was also a staunch backer of the Taliban in the 1990s, when it was one of only three countries — along with Pakistan and the United Arab Emirates — to recognize the group during its rule in Afghanistan from 1996-2001.

Darwish says although Riyadh severed ties with the Taliban after 2001 when the militant group failed to handover Osama bin Laden, who was a Saudi national at the time, the kingdom still has considerable leverage over the militant group.

Both Kabul and Washington have endorsed an expanded Saudi role in Afghanistan. Earlier this year, Afghan President Hamid Karzai reiterated that Saudi Arabia was “an important player” in Afghanistan and “has facilitated talks [with the Taliban] in the past and now.”  U.S. President Barack Obama, meanwhile, has said Riyadh’s involvement in Afghanistan could shape the success of the NATO-led mission.

Mohammad Ismail Qasimyar, the foreign-relations adviser for the Afghan High Peace Council, the presidentially appointed body tasked with negotiating with insurgents, says the Saudis have shown a genuine willingness to broker reconciliation talks.

“We welcome the promises of Saudi Arabia and we hope that this friendly cooperation will lead to an effective outcome,” Qasimyar says. “We hope that we will witness these promises coming to fruition.”

Others, however, note that the Saudis have been active in behind-the-scenes peace negotiations between members of the Taliban and the Afghan government in the past. But those talks, which took place in recent years, have yielded no breakthroughs.

Wahid Muzhda, a political analyst and former Taliban spokesman, is among the skeptics. He says many Taliban feel betrayed by Riyadh after Saudi authorities arrested and jailed a former Taliban representative, Mawlawi Shabir Ahmad. Ahmad was jailed with his four sons in Riyadh in 2001. He was released in 2011.

“The Taliban say that Saudi Arabia has acted as an enemy toward us,” Muzdha says, suggesting the Saudis have taken the side of the West. “They have not been neutral. The Taliban doesn’t recognize Saudi Arabia as a [peace] broker.”