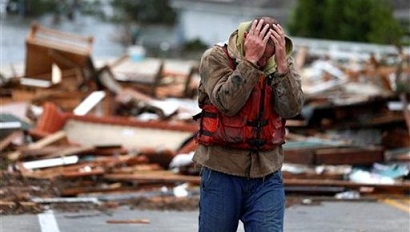 As millions across north-eastern America stricken by Sandy superstorm are seeking to resume their normal lives, Muslims have rushed to help residents affected by the hurricane.

“Islamic Relief USA Disaster Assistance Response Team (DART) has been deployed to help residents of New Jersey being affected by Hurricane Sandy,” the Islamic group said in a press release obtained by OnIslam.net.

“DART staff and volunteers are providing shelter management services and helping however else needed in NJ.”

The Zakat Foundation of America, a leading Islamic charity, has also appealed for donations to help residents affected by the massive storm.

“Millions of people are without power, schools have been closed, subways have been shut down and workers have been told to stay at home at home with their loved ones,” it said.

The biggest storm to hit the country in generations left a wide swath of the eastern United States struggling with epic flooding and extensive power outages, and the death toll climbed to at least 45.

Subway tracks and commuter tunnels under New York City, which carry several million people a day, were under several feet of water. The lower half of Manhattan remained without power after a transformer explosion at a Con Edison substation Monday night.

“We offer our unconditional support and help for the victims” of the storm, Hafiz Mohammad Saeed, head of the Islamic charity Jamaat-ud-Dawa in Pakistan, said in a statement late Tuesday.

“If US government allows, we will send our doctors, relief and rescue experts, food and medicine on humanitarian grounds.”

Saeed, who is accused by India of masterminding the Mumbai attacks in 2008 and has a US bounty of $10 million on his head, said helping Americans struck by adversity is “our religious and moral obligation.”

“Islam orders us to help them without discriminating between religion, cast or creed,” he said in the statement on his group’s Facebook page.

Many Americans were shocked by the destruction caused by the massive storm.

“I have no water, no gas,” accountant Joseph Warburton told Agence France-Presse (AFP) as he headed for Midtown.

“I walked down 20 flights of stairs to get to street level and now I must try to get to the office.”

Many roads remained blocked by trees, and road tunnels were inundated by floodwaters that slowly receded after the city was battered.

Bridges leading out of Manhattan were only open to emergency services.

Police and ambulance sirens dominated the diminished morning traffic. Pedestrians had to avoid trees torn up by the wind gusts of up to 95 miles (153 kilometers) an hour that hit the city.

About 300,000 other homes in New York lost electricity as Sandy tore down trees and flooded power transmission facilities.

“Don’t be surprised if it takes a week” to get power back, warned Con Edison electricity company spokesman Alfonso Quiroz.

The storm rocked the country six days before the presidential election.

President Barack Obama, who seeks re-election on November 6, will visit flood-ravaged areas of the New Jersey shore, where the storm of historic proportions made landfall on Monday.

As his guide, Obama will have Republican Governor Chris Christie, a vocal backer of presidential challenger Mitt Romney who has nevertheless praised Obama and the federal response to the storm.