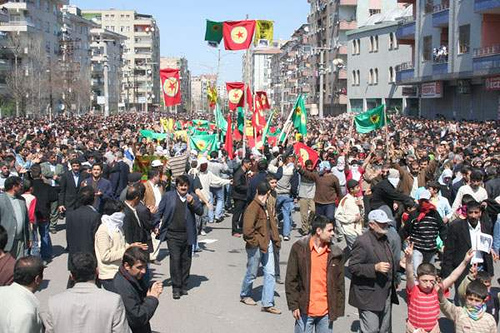 Until the late 1980s, the Kurdish language did not officially exist and speaking it was a serious offense. But Kurdish classes are part of the government’s policy to ease restrictions on its use.

Cecem welcomes the move. He says it is a beautiful feeling because the people had so many expectations, and the government responded. He says unfortunately it has taken many years – 50 to 60 – and it is only just being implemented.

Deputy Rector Sabri Eyigun, who is Kurdish, is behind the introduction of the classes. He sees the move as groundbreaking and part of the government’s drive to improve democracy in the country.

He says with the government’s democratic initiative, many taboos have been broken, and life has begun to become normal. The Kurdish language was one of those taboos, he says.

Analysts say years of state policies of assimilation have put the language under threat. Mazlum Ozer, one of the students who signed up for the class, admits he only speaks a little Kurdish. He welcomes the classes but sees it only as a beginning.

Just a few hours down the road in Syria, children are learning Kurdish as a mother tongue, after Syrian Kurds seized control of their region from Syrian President Bashar al-Assad’s forces earlier this year. Neighboring Iraqi Kurds have had this right for years.

He says there is no such thing as education in the mother tongue. He says the country’s official language is Turkish, and the government has done its duty with Kurdish classes in schools and universities.

Erdogan dismissed the demand as a terrorist demand of the PKK, a Kurdish rebel group fighting the Turkish state.

Local Diyarbakir Mayor Abdullah Demirbas shows the latest court cases he is facing. Among the offenses are publishing information in Kurdish on services and even children’s books. Thousands of Demirbas’ party colleagues have been detained this year, under anti-terror laws.

Demirbas says with Kurds across the region gaining more rights, the government will have to make a decision.

At the nearby Dicle Firat Cultural Center, Kurdish songs are freely sung. The language and culture are increasingly making their presence felt. Next month, the city will see a production of Hamlet in Kurdish.

Local singer Farqin believes there is a growing momentum across the region for Kurds to secure their rights.

A “Kurdish Spring” is an expression increasingly being heard in Diyarbakir. The question being asked is will Ankara embrace or resist the winds of change sweeping the region?