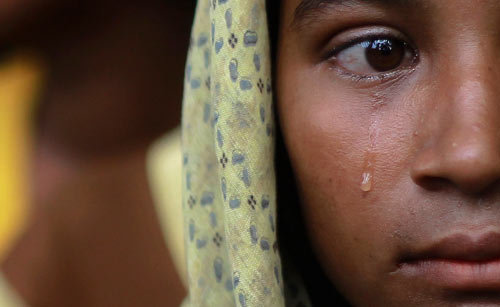 PanARMENIAN.Net – Myanmar’s government said Monday, Oct 29, it has boosted security in a western state hit by ethnic and sectarian unrest as the number of displaced rose to 28,000 people, mostly Muslims, The Associated Press reports.

The latest violence between ethnic Rakhine Buddhists and Rohingya Muslims, which began Oct. 21, killed at least 84 people and injured 129 more, according to the government. Human rights groups believe the true toll could be far higher.

A tense calm has held across the region since Saturday, Rakhine state spokesman Myo Thant said.

He said security had been stepped up in the state, with additional police and soldiers deployed, but he declined to give details. The priority now is to ensure those who lost homes have adequate shelter and food, he said.

UN Resident and Humanitarian Coordinator in Myanmar Ashok Nigam said the figure of 28,000 displaced was likely to rise because some people who fled affected areas along the coast by boat have yet to be counted.

An estimated 27,300 of the displaced are Muslims, Nigam said, adding that the UN figure was based on statistics from local authorities.

Human Rights Watch has said that the Rohingya have suffered the brunt of the latest violence.

Tensions have simmered in the region since clashes first broke out in June, displacing 75,000 people — also mostly Muslims.

The long-brewing conflict is rooted in a dispute over the Muslim residents’ origin. Although many Rohingya have lived in Myanmar for generations, they are widely denigrated as intruders who came from neighboring Bangladesh to steal scarce land.

The UN estimates their population in Myanmar at 800,000. But the government does not count them as one of the country’s 135 ethnic groups, and so — like neighboring Bangladesh — denies them citizenship. Human rights groups say racism also plays a role: Many Rohingya, who speak a Bengali dialect and resemble Muslim Bangladeshis, have darker skin and are heavily discriminated against.