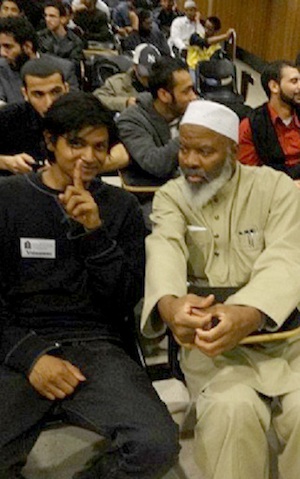 A former NYPD informant tells the Associated Press that he was paid as much as $1,000 a month to “bait” his Muslim friends and associates into making incriminating statements and indiscriminately spy on their activities, a tactic the department has repeatedly denied that it engages in. “We need you to pretend to be one of them,” the informant says his police contact, “Steve,” told him. “It’s street theater.”

19-year-old Shamiur Rahman, a Queens native of Bengali descent, says he was approached by a plainclothes officer after a series of low-level marijuana arrests and asked to gather information and photographs as part of a strategy that “Steve” called “create and capture.” Rahman says he spied on “everything and everyone,” taking pictures inside mosques and listening in on imams’ conversations. He presented himself as a person who wanted to turn his life around with the help of Islam, fooling the leader of the Muslim Student Association at John Jay College and its members.

Following the series of damning investigative reports by the AP on the NYPD’s Muslim surveillance program, the department’s top spokesman, Paul Browne, has said that the NYPD “carefully and lawfully” follows leads related to terrorism, and does not engage in indiscriminate spying.

Here is what NYPD Commissioner Ray Kelly had to say in March about his department’s policy on the surveillance of Muslims:

Undercover investigations begin with leads, and we go where the leads take us. As a matter of Police Department policy, undercover officers and confidential informants do not enter a mosque unless they are following up on a lead vetted under Handschu.Likewise, when we have attended a private event organized by a student group, we have done so on the basis of a lead or investigation reviewed and authorized in writing at the highest levels of the department, in keeping with Handschu protocol. Some leads have taken us to very dangerous individuals.

That “Handschu protocol,” which was revised after 9/11, essentially states that the requirement for investigation of political or free speech activity requires “information which indicated the possibility of criminal activity.” That possibility was perhaps manufactured by Rahman when he cherry-picked “inflammatory” comments made by his friends and acquaintances that were knowingly taken out of context.

Rahman ceased to be an informant in early October. One of his last information-gathering missions was covering the Muslim Day Parade. He later informed the people he was spying on what he was doing, and asked for their forgiveness. “I was trying to get money,” Rahman told the AP. “I was playing the game. “I hated that I was using people to make money. I made a mistake.” So far, the NYPD’s Muslim surveillance program has produced exactly zero credible leads.

You can read our interview discussing the AP’s coverage of the NYPD’s Muslim surveillance program with Managing Editor for U.S. News, Mike Oreskes, here.